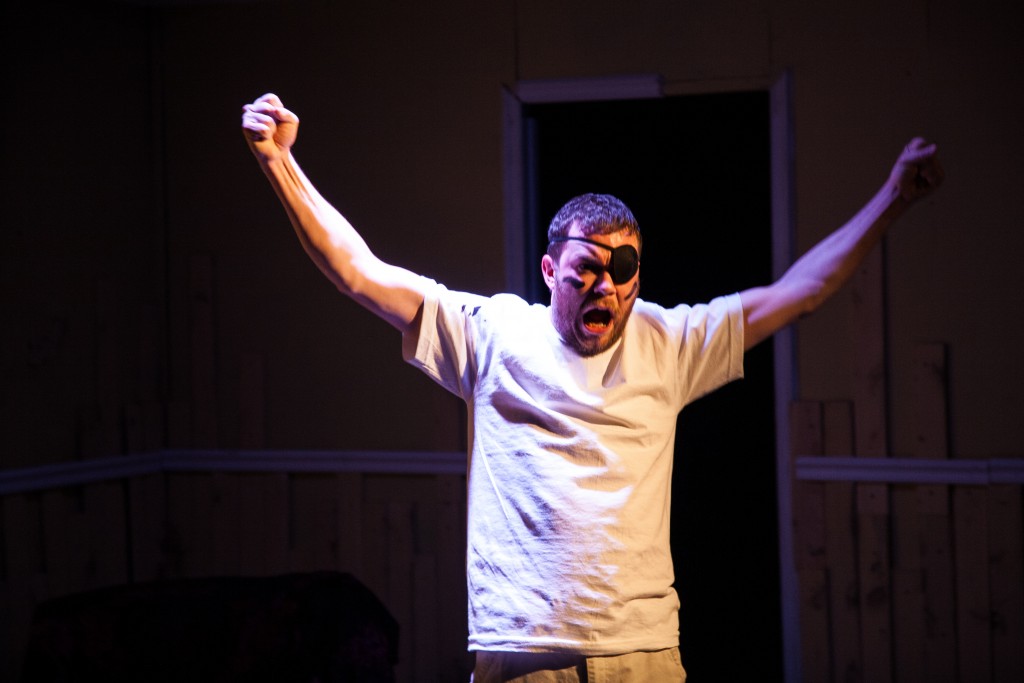 First there’s the slow-burn, Ry Cooder-esque slide guitar. Then there’s the invocation of the sun’s ceaseless effrontery. All at once, everything turns the color of the devil himself. This is desert country. It’s also the setting for Eric Dufault’s viciously funny “Year of the Rooster.” Taking “blood, sweat and tears” to its literal extreme, Red Theater’s production is a sharp critique of what’s truly at stake in the business of entertaining.

There is an intensity to this ensemble, the level of which seems set by up-and-comer Gage Wallace. Wallace’s gifts as an actor manage to appreciate with every performance. Here he plays the one-eyed Gil, a victim of nearly everything in his life but most especially his own illusions of grandeur.

Flush with ideas, “Year of the Rooster” has a bit too much plot to tell in its relatively scant runtime. As the pathetic yes man, Gil turns scenes over too quickly, diminishing their stakes. The second act’s “short way up, long way down” theme strains believability: was winning one fight really that big of a deal? Dufault expressively captures this world but doesn’t give us a roadmap for navigating its twists and turns.

“Year of the Rooster” excels when pushing perspective and language to extremes as in the case of Gil’s champion rooster, Odysseus. Played with fierce focus by Jeff Kurysz, descriptions such as “anger shaped like an anvil” become vivid to the point of being hyper real.

Despite having some internal struggles, this is a blue-ribbon-level production from a theater that has recently forgone typical admission structure. In doing so, Red Theater inaugurated their own battle for survival. If “Year of the Rooster” is any indication, they’ve definitely got a fighting chance. (Kevin Greene)