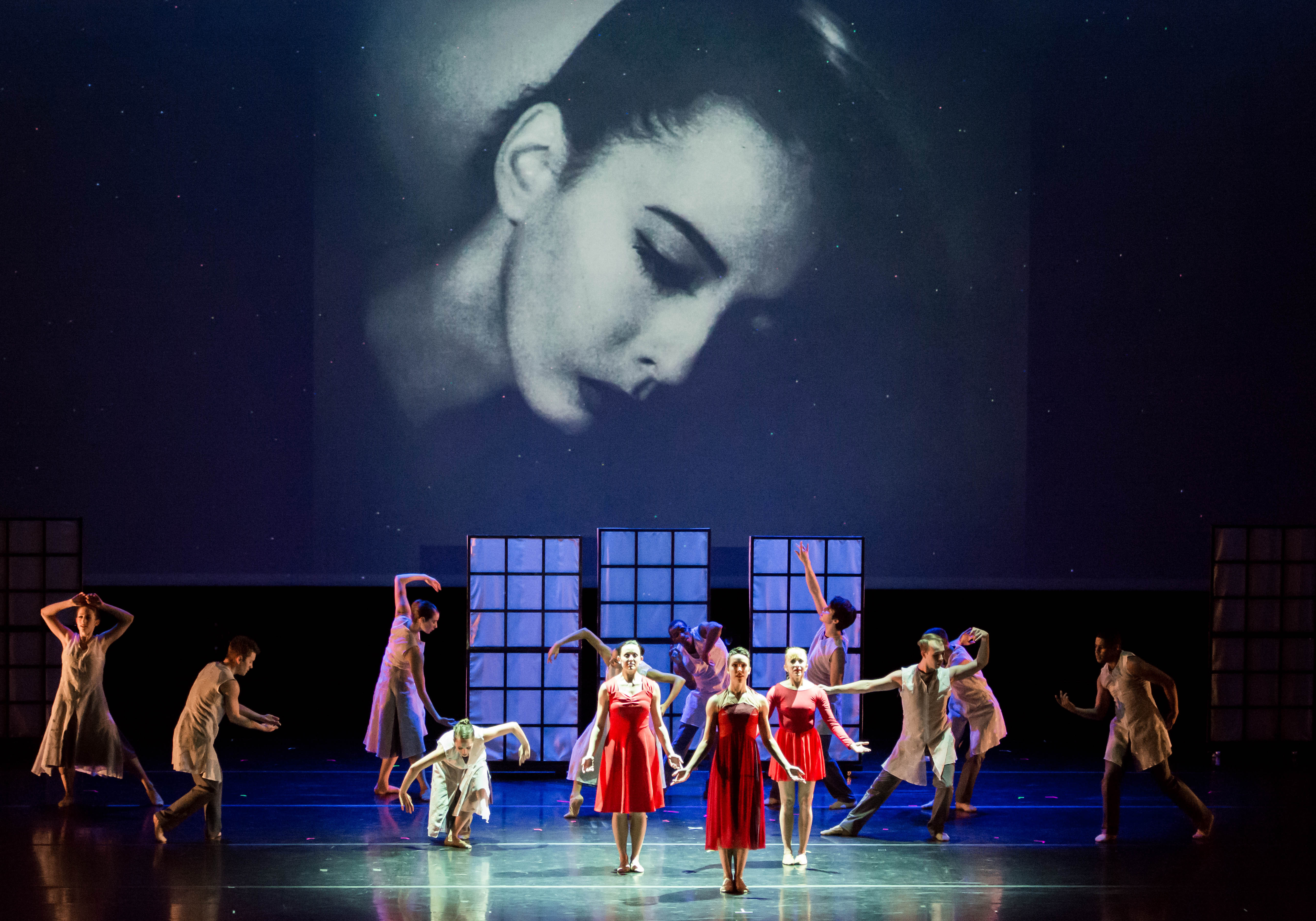 Melissa Thodos certainly had compelling material to work with when she conceived of Sono’s Journey, which premiered at the Auditorium Theatre Saturday. Sono Osato was, by all reports, a dancer who broke boundaries in the twentieth century. She was not only the first dancer of Japanese descent to join the Ballet Russe de Monte Carlo but also the first American to dance with the company. She starred on Broadway while other Japanese Americans, including her father, Shoji, were imprisoned in World War II internment camps. She sometimes did what she had to do to work: she pancaked out her Asian features and whitewashed her name, and even then she wasn’t allowed to tour abroad with American Ballet Theatre. Such a life surpasses invention, exemplifying the thorns we cultivate in the ground we claim as our territory, even in a nation founded on ideals of liberty, equality and justice. Presenting a biographical ballet in the very theater where Osato successfully auditioned for the Ballet Russe at the age of fourteen, in the very city where her parents once tended the Japanese garden designed for the 1893 Columbian Exposition seems a noble occasion. But the coincidence that makes the same stage work twice over is cloying rather than clever in the resulting ballet, which seems more intent upon belaboring points on a timeline than transforming a life into a work of art.

Osato’s life is portrayed in a series of vignettes, each marked by a telltale flex of the hands. They make their first appearance in a piece for the ensemble that ushers Osato’s father, Shoji (John Cartwright), out of Japan. In a collage with rice paper screens, pentatonic flourishes, and obi-like belts on the costumes, flexed hands stand for the mystique of the exotic. They get imported to America, where Shoji, a photographer, uses them to frame the scene before him in an exceedingly literal gesture for taking snapshots. They appear again, when a ballet master presents steps at an audition in the sign language ballet dancers share, substituting hands for feet, and again, in citation, to show, hieroglyphically, Osato dancing as the Siren in “The Prodigal Son.”

Yet the problem with the piece is not the use of the hands so much as the redundancy of the media. Osato’s story is presented in a voiceover narration of her autobiography, read with an emphatically senescent wobble by Ellen Karas. The same story is virtually mimed onstage by the dancers, who demonstrate ballet exercises when the voiceover recalls taking dance classes as a girl, put on a little ballet when she describes performing with the Ballet Russe, do a musical theater number when she talks about her turn to Broadway, and so on, as if Thodos feared the proceedings might go misunderstood. However, without space for interpretation, the dance becomes merely a report of the text and ultimately a mimicry that can only ever be found wanting, because, able as they are, the Thodos dancers are not the Ballet Russe, and, even played by three dancers (Shelby Moran, Jessica Miller Tomlinson and Abby Ellison), ventriloquized in speech, and projected in still images, Osato does not come to life on stage. Osato loves to dance, the voiceover announces, because “it is truer than any verbal communication I have ever witnessed”—the work might have benefited by trusting the dance to tell the story. In the end, perhaps nothing can substitute for presence, and when Osato, now ninety-six, was brought onstage in a wheelchair, the audience rose to its feet for her. (Irene Hsiao)