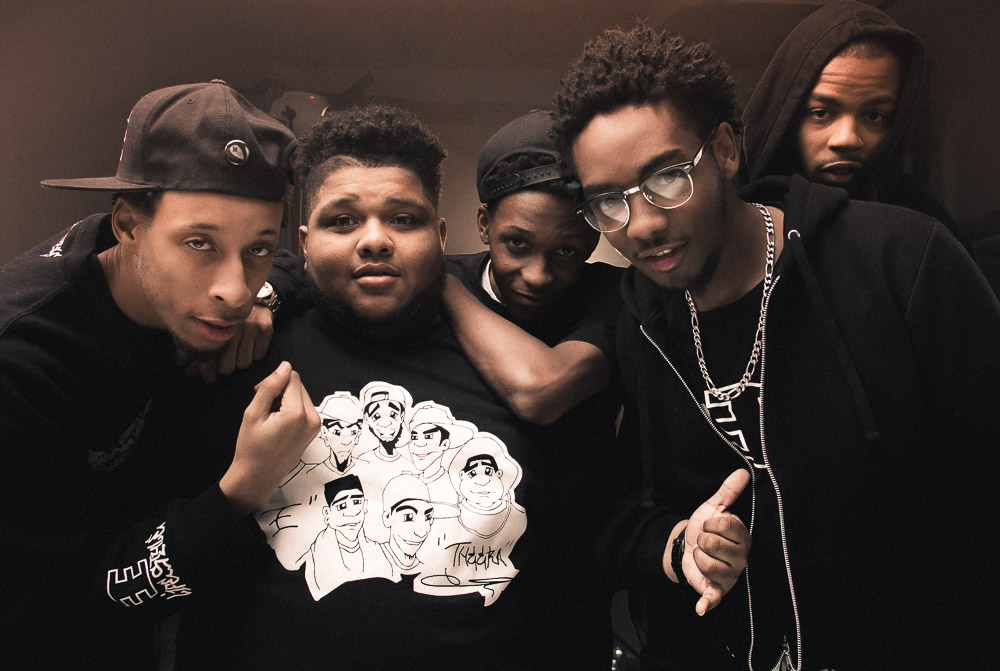 Born on the West and South Sides in the eighties, footwork is a dance style that evolved out of juke and moves to a breakneck tempo of Chicago house music. Like the name suggests, footwork is a blur of tight, precise, rapid-fire foot movements accented by slides, glides and skates across the floor that look like film alternating between fast forward and half-speed. Hungry for new and faster tracks, footwork dancers became DJs, pushing the tempo up to create a genre of music characterized by its adrenaline-pumping 160 beats per minute.

With the advent of YouTube, footwork gained a following in Europe and Japan—DJs and dancers toured internationally, although their culture was still unknown in large parts of their hometown, and dwindling in neighborhoods that were once a center of the scene. But in 2015, a freshly formed dance crew called The Era began pulling in attention with both hands: a VICE documentary, a grant from High Concept Labs, a Chicago Dancemakers Forum Lab Artist grant, a grant from University of Chicago for an archival project on the history of footwork, and founding member Litebulb was named one of Dance Magazine’s 25 To Watch in 2016. In September, The Era is co-curating an installation about the history of footwork at Columbia College. With recognition pouring in from the academic and mainstream dance worlds, The Era is helping a style created and danced by young black men and women on Chicago’s South and West Sides gain citywide acknowledgement as a legitimate art form. And most importantly to the dancers, they’re preserving footwork for the next generation. The Era is currently working on a stage show entitled “Living at 160,” slated for summer of 2016. We talked with the crew—Litebulb, P-Top, Dempsey, Steelo and Manny—along with artist Wills Glasspiegel who has been documenting The Era, at their rehearsal space in High Concept Labs.

What drew you to footwork?
P-Top: A lot of generations have done it; it’s a big Chicago thing.
Steelo: I like how it’s personal; you can put your own creativity and spin on it.
Dempsey: It’s fast and it’s smooth at the same time. Everyone in Chicago should know what footwork is or know it when they see it.
Manny: When I was growing up, you couldn’t be from Chicago and not do it; it was like a sport.
P-Top: Kids aren’t picking it up nowadays. Literally every party in Chicago used to have footworking.
Litebulb: People would drop it by the time they were twenty-five because they’d have to get jobs to support themselves. It was never a scene for that age. What we’re doing now is showing what you could do as a footworker as part of the older crowd.

Why aren’t kids picking it up now?
P-Top: Lack of communication to the kids. When we were young it was about being the best, building a reputation. As a kid, you have to keep busy and pick up the next thing: what’s the best shoe out right now? They have to have it.
Litebulb: We’ve diminished over the years, so we’re trying to build the culture and make it a citywide thing, an international thing. We want to collaborate more because collaboration brings better art. We want to build an atmosphere for everybody to thrive—not just us, everybody.

Within the dance circle, it’s a very intimate atmosphere. You’re improvising, you can see a conversation going on. How do things change for a stage show?
Litebulb: I feel like the key is not losing that. We want to create that experience on stage.
Steelo: We put a lot of ourselves into it. I think the crowd will feel that too.
Manny: We want to make everybody feel like they’re in the circle. We teach workshops and have people battle each other in the circle so they can have that experience and feel it.
Wills: It’s important to remember that footwork has been choreographed in routines in Chicago for the last twenty, thirty years. This is not the first time.

P-Top, in “Meet The Era,” [the VICE documentary directed by Wills], you said The Era is going to change everything. How so?
P-Top: I’m not from the same group as these guys—they’re from the South Side, I’m from the North Side. We came together with this one vision. Litebulb said he had a vision and we’re building it together. It won’t be just a Chicago thing, it will be a global thing.
Manny: It won’t just be an urban thing.
P-Top: It’s cultural, just like tap dancing. We’re giving our emotion to it. You’re not just seeing people moving their feet fast. It’s very cut, crisp, precise.
Litebulb: People are embracing it globally. A lot of dance is marginalized: you have to look a certain way, be a certain way. We represent that you can make a living doing this.

Why do you think this last year has been such a big year for The Era?
Dempsey: I feel like this has been coming since I’ve been in high school. I remember waking up thinking about this.
Litebulb: We didn’t mean for this necessarily to happen. I feel like footwork is one of the most slept-on dance styles in the world. It shouldn’t be this style or that style, it should be all styles.
Manny: As far as the awards and grants…for me it feels like we were in the right place at the right time. Had we not started when we did, it might not have lined up like this. And everything has been back to back.
Wills: A lot is owed to the musicians, too. They’ve contributed a lot.

The relationship between the dancers and the DJs is so interesting—how the work of each informs the other. And in footwork the dance so often comes first, with music being written to the dancing. That’s such a special and rare relationship.
Litebulb: All the top DJs in footwork used to be dancers. They watched how everyone’s moving, and the tracks started speeding up. It was at 130 or 140 and shot up over the years. There are thousands of unreleased tracks of footwork music DJs were making. We were sitting there while they’re making them, we could get up and dance while they’re making them.

There’s a lot of interest in footwork around the world, but not a whole lot of awareness in parts of the city where this dance was created and has been for decades.
Litebulb: Yeah, but it’s been changing for about the last four years.
Manny: The music is probably what hit first to start the change with footwork being recognized in all of Chicago.
Litebulb: All the music went from vinyl to online. So it diminished in Chicago but spread overseas. Now it’s picked back up in Chicago spread to downtown. There are now people from the North Side coming down to hardcore footwork on the South Side.
Wills: You guys have inspired other crews to form too, and that’s really gratifying to see.
Manny: All these new groups getting started is like an accolade. Others are seeing how you can be a good and successful footworker in the community.
Litebulb: Being a spark is cool. The accolades are great, but if we didn’t have any of it and were just spreading the culture, that’s super cool. That’s the accolade.
Dempsey: It used to be everywhere. At one point in time, I’d be going home and I’d ask anyone on the bus, “Do you know how to footwork?” and we’d go battle.
Litebulb: It was fun, but it could get serious. Serious fun.
Steelo: It was everywhere: at school, in the halls.
P-Top: I once skipped class to embarrass one guy at lunch period.
Manny: The way of teaching footwork has changed a lot too. It used to be one-on-one and now there are whole workshops.
Dempsey: It used to be like Mister Miyagi who had the secret formula, but now everybody has it.
Manny: It’s not bad, but it’s way different. You can’t give as much attention to fifty people. It took me a long time to learn to ghost, now I teach ghost in five minutes. It’s so interesting to see what the next generation will do. It’s gonna be better, it’s evolving before our eyes.
Litebulb: I used to be at every battle, watching it disappear. Now it’s slowly trickling back up. It was almost necessary for footwork to diminish the way it did. It alerted people to realize, hey, we could lose this if we don’t do something now.
Manny: Now we travel state to state to battle footworkers. We travel and teach internationally.

Is there anything else you’d like to mention?
Manny: We’ve gotten a lot of support. High Concept has been huge. Not just space, but with mentorship.
Litebulb: If we didn’t have the connection with High Concept we wouldn’t have met the people with Chicago Dancemakers Forum. They’ve helped us strategize and bring the vision to life. Being able to come somewhere to practice…we started in an alley.
Wills: It doesn’t take too many people to pass on a culture; it kind of just takes one person to spread something. And because footwork has been in Chicago since the eighties, of course you’re going to have an ebb and flow. But what I think is interesting is that it’s not a trend; it’s still here. Sometimes people look at dance styles, especially black dance styles, as a trend. That, “oh, they’re just going to discard it or move on to the next.” But here’s evidence that that’s not the case.
Litebulb: “Living at 160” is coming toward the end of the summer. It’s going to be a good experience we want to share with everybody, welcome them to our space. And to our neighborhood.
Wills: We talked about aiming for a show at the MCA because footwork to us is a contemporary art form, but I think at the same time we’re gonna take this thing anywhere we want to take it, especially back in the community.
Litebulb: It’s been a fun year.