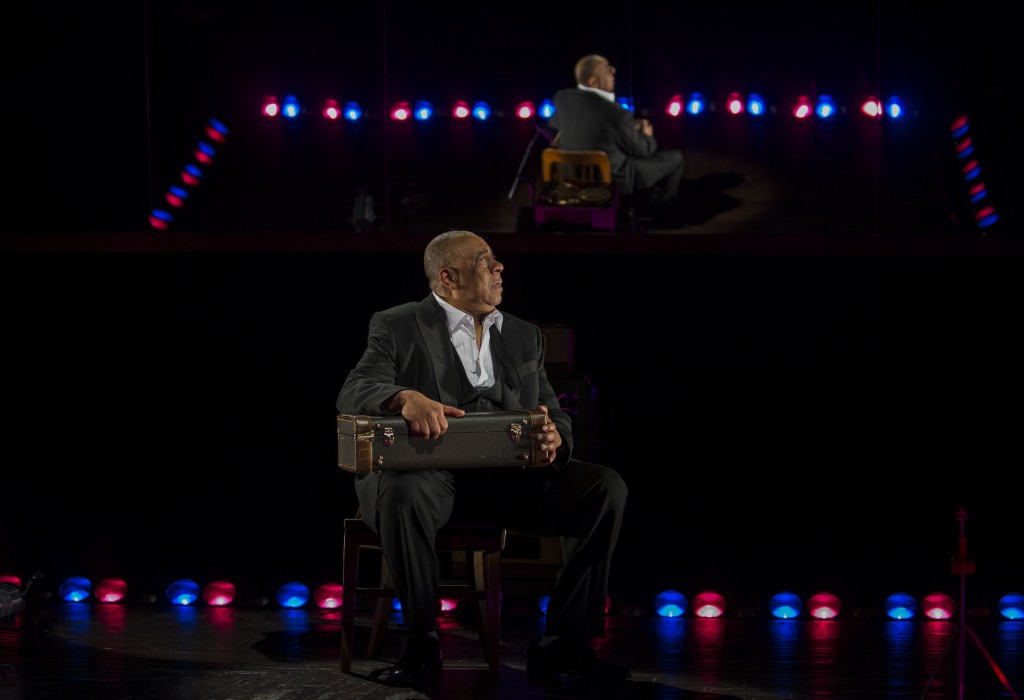 A good rule of thumb for one-person plays: start with a joke. It reassures the audience that they are not in for a lot of solipsistic drivel. Being the drama critic at The Wall Street Journal, Terry Teachout knows a thing or two about how plays start and where they go from there. So when we first hear that inimitable baritone warble, which arguably made Louis Armstrong one of the most famous musicians of all time, announce that the owner of that voice has shit himself, a tone is set that the rest of “Satchmo at the Waldorf” is not always able to replicate.

Teachout’s play about the great entertainer is as clean and clear as old Satchmo’s trousers are soiled. Teachout’s studious ear for voice finds an ideal extension in Barry Shabaka Henley who pivots between Armstrong and his manager, Joe Glaser. Director Charles Newell keeps the pace brisk and Henley keeps up for the most part. Some light flubbing on opening night suggests that things could afford to be slowed down a bit. Indeed, the play is most hypnotizing when the music tells the story. Quiet moments are few and far between but they arrive at critical junctures like a long distance swimmer coming up for air.

While Teachout maintains that “Satchmo” is a work of fiction, he largely resists inserting melodrama. The only element that passes as even remotely villainous is the comic foil of Miles Davis’ self-seriousness. Joe Glaser is largely acquitted of his sin of greed—though not of cowardice—and Louis’ moral righteousness is never called into question.

“Satchmo” does not try to hide its reverence for its subject. By erasing critical distance, Teachout presents a lovingly constructed ode to an influential figure who most of us likely know too little about. The end result is a play that is less enlightening than simply informative. While hardly a sin, if you’re looking for a more complex and nuanced portrait of Armstrong your search will continue.

“Satchmo at the Waldorf” is a minor and relatively safe work for Court Theatre. Nevertheless it is guaranteed to be a crowd-pleaser, a quality old Satchmo would certainly approve of. (Kevin Greene)