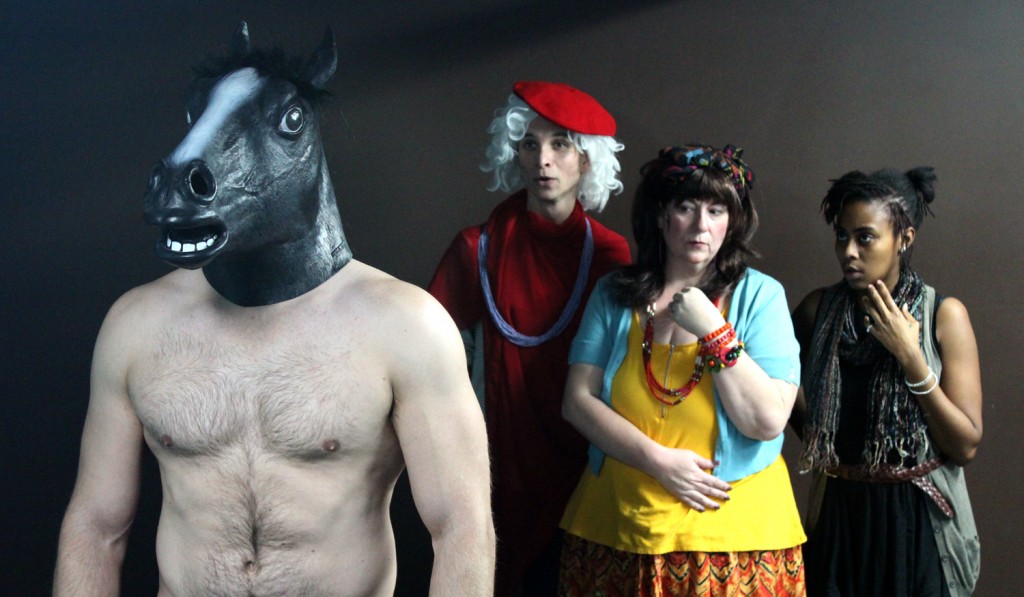 It is a truth universally acknowledged that a small town in America must be in possession of repressed women in want of entrepreneurial men to sweep them off their Hush Puppies-clad feet and relieve them of the pennies they keep in pickle jars buried under the chicken coop—or, as it may be, of the fortunes they have amassed peddling methamphetamines. This is the premise of “Pony Boy,” directed by Andy Eninger with music by Brad Kemp, currently playing at the Annoyance.

Set in the authentically claustrophobic town of Waynesville, Ohio, “Pony Boy” brings interloper Frankie Blotch, a.k.a. Bud (“like a newborn baby flower”) Sports (Randall Harr), to a little hive of women whose dreams of fame, money and love have gone disappointingly awry. A convalescent farm for ponies supplies Bud with his latest scheme—pony therapy, which is actually everything a woman could want: well-muscled, nearly nude ponies with vacant eyes that invite the projection of such human necessities as souls.

This is a middle-American malaise and everyone is sick, whether with twitches of a mangled mouth that belie a voice yet honey toned, as in Sydney, the mayor’s damaged daughter (Liz Joynt Sandberg), the lovelorn spinster, Phoenix (Erin Fleming), or the one whose Procter & Gamble-employed husband bankrolls her unprofitable business (Dori Goldman). Those not sick will soon be rendered so, like the town’s last living Quaker (Wanjiku Kairu), dragged back from medical school to operate her deceased parents’ cookware shop. Even the ponies (Chris Kervick and John Loos in frightful/delightful costumes by Megan Kellie) are steroid addicts in need of antibiotic baths.

The story isn’t new, the solutions aren’t pretty, and there’s little splendor to it, yet the songs and dance of “Pony Boy” are done with verve and persistence, which is the optimism that ennobles the vague and mediocre matters of this country. (Irene Hsiao)