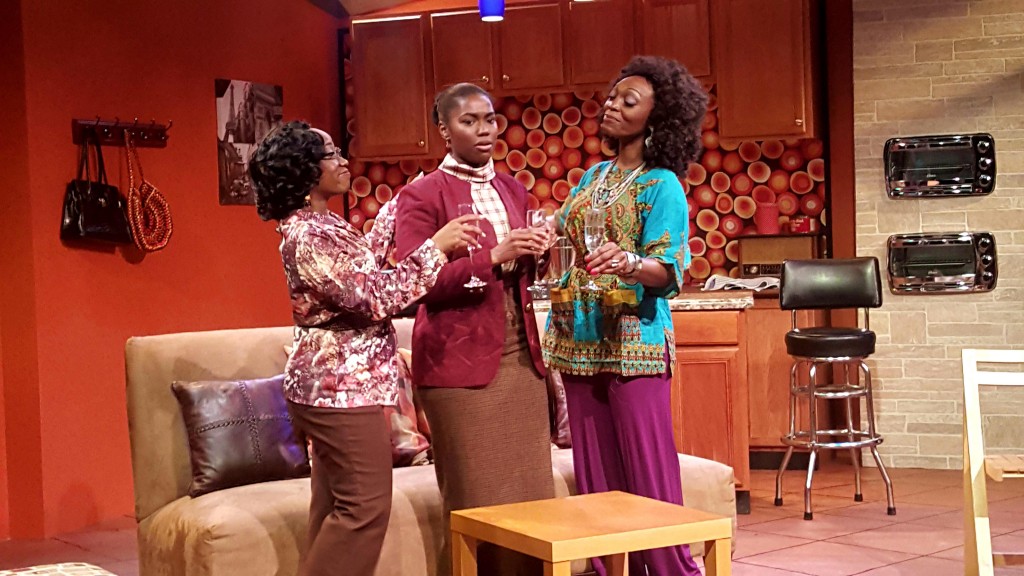 Pearl Cleage’s “What I Learned In Paris” is about revolution, but not the political kind you might imagine. Maynard Jackson has just won the historical 1973 election making him the first African-American mayor elected to a Southern city. His campaign workers Lena (Alexis J. Rogers), J.P. (Darren Jones), Ann (Kristin Ellis) and John (Ronnel Taylor) are celebrating the victory the fruits of their labor produced. This in itself seems fertile ground for a seething new political drama, seeing as Cleage was Jackson’s speech writer for the momentous Atlanta campaign.

Yet she takes another route by choosing to focus on a love between Ann and the two men vying for her affection: her kinda-sorta husband J.P. and John, the man with whom her true heart lies. This choice seems rather futile, that is until J.P.’s ex-wife Evie (Shanesia Davis) shows up unannounced after being gone for two years.

Evie is a striking woman, not in an overbearing sense but rather in a regal way.  “A prodigal daughter,” she calls herself at one point, though we learn this prodigal daughter has not come home destitute. She returns with more life, confidence and wisdom than when she left. And as she begins to share with Lena and Ann her lessons learned in Paris, the brilliance of Cleage’s choice to focus less on the men who “rise to meet the demands of history,” per J.P.’s tagline, and more on the women these demands affect, shines through.

Helmed by director Daniel Bryant, Congo Square’s production strikes the perfect balance between comedy and message, which could have surely gotten lost in less capable hands. Shanesia Davis plays the part of Evie with steadfastness and grace. Alexis J. Rogers is the coveted listener and mediator we all desire in our own lives. Ronnel Taylor’s quirkiness will have you in tears, the good kind, of course. Kristin Ellis plays Ann with authentic vulnerability and Darren Jones imbues J.P. with the seriousness a historical figure demands.

Seeing this play may be fatal to your pocketbook but beneficial to your soul as you book a trip to take a Paris adventure of your own. (Loy Webb)