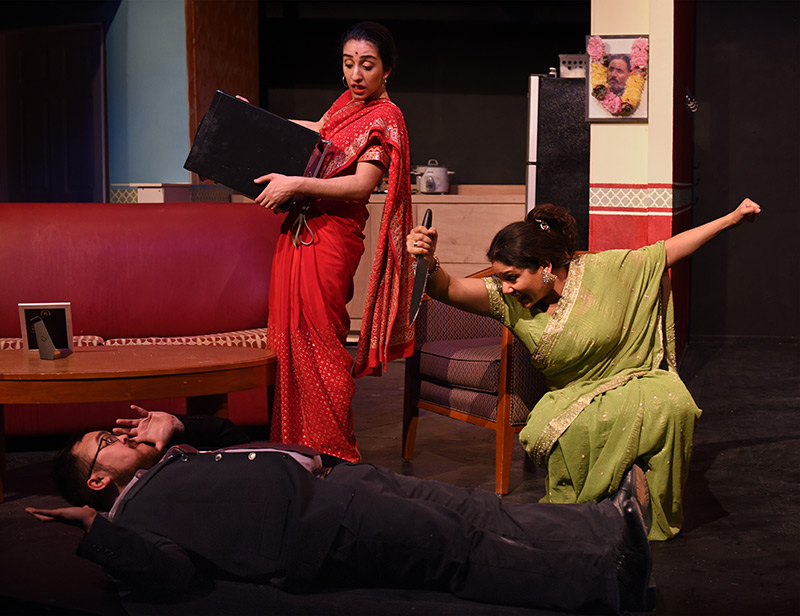 If you adore the satirical trivialities in Oscar Wilde’s “The Importance of Being Earnest,” you’re sure to enjoy Shane Sakhrani’s nod to the master of wit, “A Widow of No Importance,” playing at Victory Gardens. Exposing social customs, specifically conduct toward widows in India, as being claustrophobic and arbitrary, this successful comedy of manners also reveals, rather earnestly, the despair that those external expectations wreak when internalized.

The play opens in a flat in a posh neighborhood in Mumbai where we see the widow Deepa (Alka Nayyar) praying for her daughter Tara (Vahishta Vafadari) to marry, offering to give up the few pleasures that remain in her life: half a teaspoon of sugar in her daily tea, Coke…even Diet Coke. Deepa’s prayers, however, are in vain: twenty-five-year-old Tara most certainly does not want an arranged marriage. She refuses to participate in the same system of mores that keep widows like her mother locked up.

Trapped in her flat, Deepa wants almost nothing for herself. In fact, she barely seems to think of herself except in terms of what she can give up or give to others. Such self-imprisonment is almost invulnerable to change. Yet love is a great catalyst that changes us before we know it, even when change is inconvenient and flies directly in the face of social norms. Love comes to Deepa in the form of her young divorced neighbor Vinod (Anand Bhatt), her son’s childhood friend whose first crush was on Deepa.

What ensues are the comedic tropes of a hidden affair: Vinod hiding in the bathroom when Tara comes home early one afternoon; Tara falling for Vinod and sparking her mother’s jealousy. Meanwhile, a hilarious matchmaker Lalitha (Priya Mohanty) consistently tries to set them all up with someone from her picture albums of singles. The comedic rhythm of the play evokes regular laughter but just as regularly feels easy and formulaic.

Custom and “What will people say?” interfere with Deepa’s ability to enjoy her and Vinod’s relationship but the audience must wait until the end to see whether or not love and change will triumph over fear and tradition. (Joy Miller)