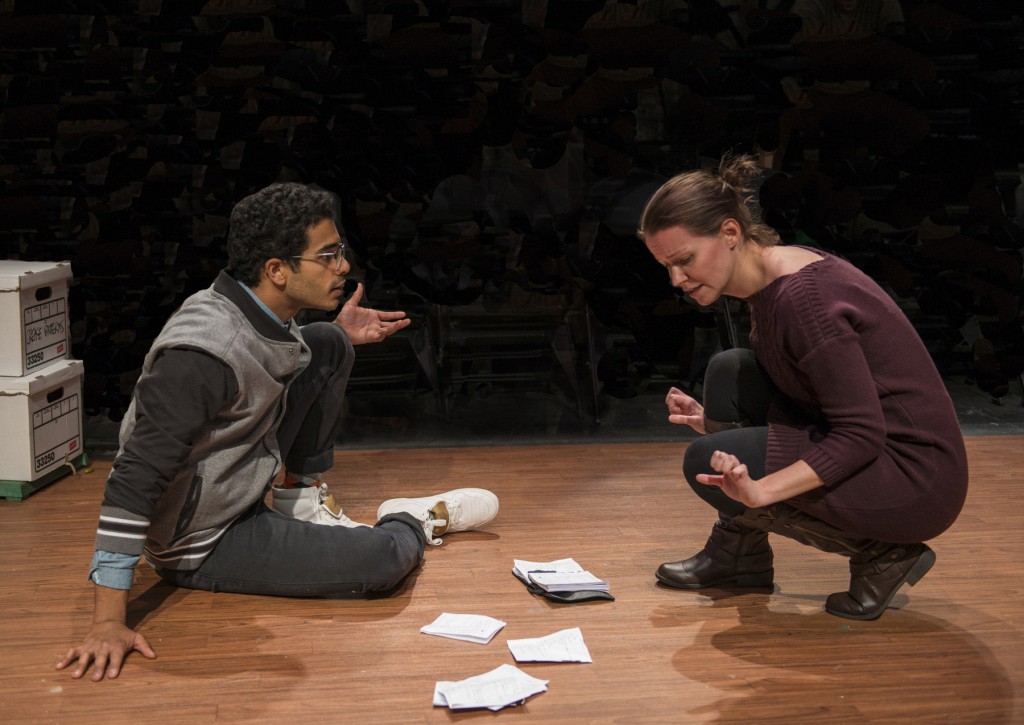 At the heart of the play is esteemed origamist Ilana (played with brittle intensity by Cortney McKenna), whose life has collapsed into bitter isolation. Into her cluttered studio comes the high-school calculus teacher and origami groupie Andy (Joseph Wiens, exuding a nebbishy, shaggy-dog awkwardness), who literally counts all of his blessings—including “turkey jerky”—in a book. He seeks to draw Ilana out of her claustrophobic existence by having her tutor a student of his, the budding genius Suresh (Awate Serequeberhan), who recently lost his mother and badly needs nurturing. Reluctantly, Ilana (“I’m not a people person”) agrees, creating a volatile triad of neurotic perfectionist, heart-on-sleeve optimist and wounded and angry adolescent. The three proceed to test each other, attempting to create connection and trust out of the thin tissue of hope and sympathy.

It’s not a perfect play–the strutting, saggy-pantsed prodigy Suresh often comes off more like a plot contrivance than a plausible character–but director Devon de Mayo and company have mounted a damned near flawless production. Dialogue and movement are energized and purposeful from the play’s opening moment to its crystallizing final image. Scenic designer Grant Sabin’s narrow set folds us into Ilana’s boxed-in world, while Brian Healy’s pastel lighting patterns playing upon translucent overhead screens capture the delicacy and charm of the folder’s craft.

The sure-handed de Mayo succeeds in bringing out the work’s outstanding quality–its unsentimental perspective on the artistic process. Ilana is no angel. Her creative impulse is intimately tied to inner wounds and her need to create healing order emerges from the grim anarchy of her existence. If this sharp and layered drama has one central message, it is that every creative act involves self-transformation, which is never without cost and pain. “Animals Out of Paper,” billed as an “uncommon love story,” is not so much a romance as a heartfelt valentine to art as a spiritual pursuit. (Hugh Iglarsh)