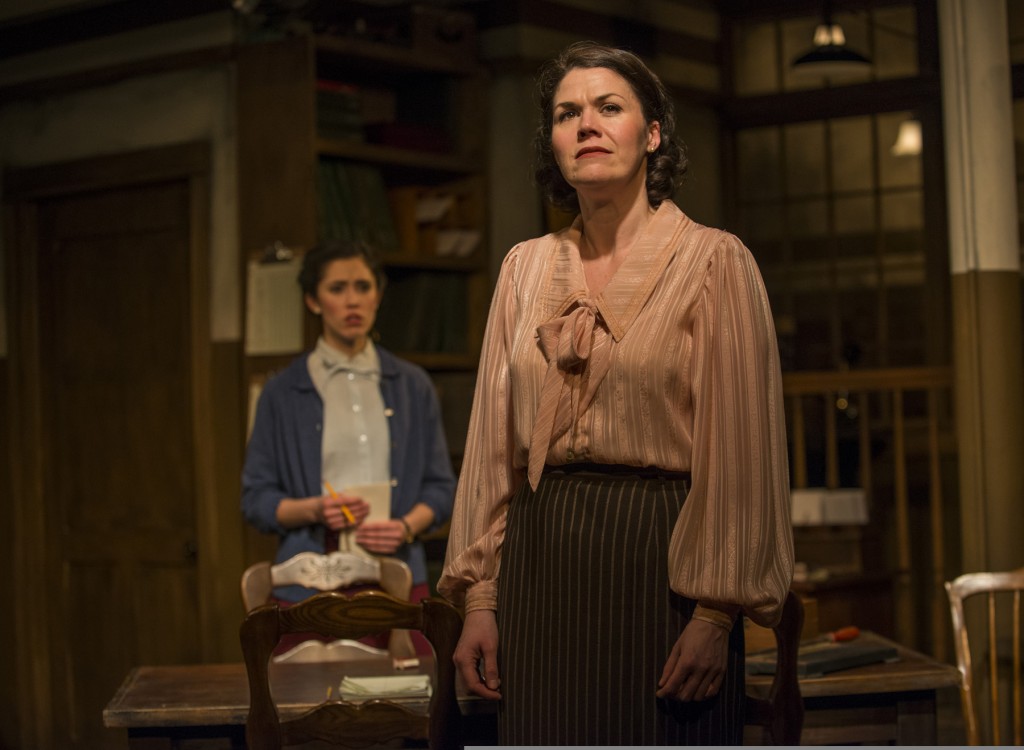 Much of Griffin Theatre Company’s “London Wall” works quite well: a story of female connection in the male-dominated workspaces of the West End, a sentimental heart and the fiery tempo of a clever English drama. In the hands of this ensemble, it falls in to place easily. The play, written in 1931, seems almost prescient in its social awareness: playwright John Van Druten constantly asks what constitutes sexism, questions how one deals with oppression in public places and where responsibility stops. This is a world with a cruel, simple dichotomy for women: economic stability or love.

The cast broaches these issues with quick wit and skill. They stand strong in colorful contrast: senior typist Blanche Janus (Vanessa Greenway) exudes a miasma of contempt toward the grotesque parody of a casanova while a doddering, rich old woman offers her trove of wisdom to the youngest employee, Pat Milligan (Rochelle Therrien). With the charm and intelligence many of these actors play (Amanda Powell’s chronic hangover-sufferer is a stunning piece of comedy and honesty), the two-and-a-half hour runtime evaporates. Watching these actors’ craft unfold in this kind of intimate setting is poignant.

Robin Witt’s direction is usually crisp and easy to read. When it’s not, it’s in instances of high political stakes, creating a form of tonal whiplash which undermines the strong feminist currents of the play. For instance, moments after a sexual assault, Milligan’s employer charismatically bowls over the traumatic instant while she cries out in the corner. This might be an uncomfortable reckoning of internal dissonance and epiphany. Instead it becomes a form of cruelty as the audience laughs at the man’s casual dismissal, ignoring Milligan’s strife. The choices Witt gives the audience aren’t always marked out and the intent feels lost. They seem noncommittal and thus more open to interpretation.

The visual language sometimes offers imagery of interrogation or claustrophobia, reminiscent of wolves closing in around these women. It is at those moments of brutal perspective and empathy that “London Wall” becomes relevant. However, given how often Witt shorts her steps in moments of crisis, the play’s representation of misogyny turns the audience into unthinking bullies of the 1930s. (John Van Ort)