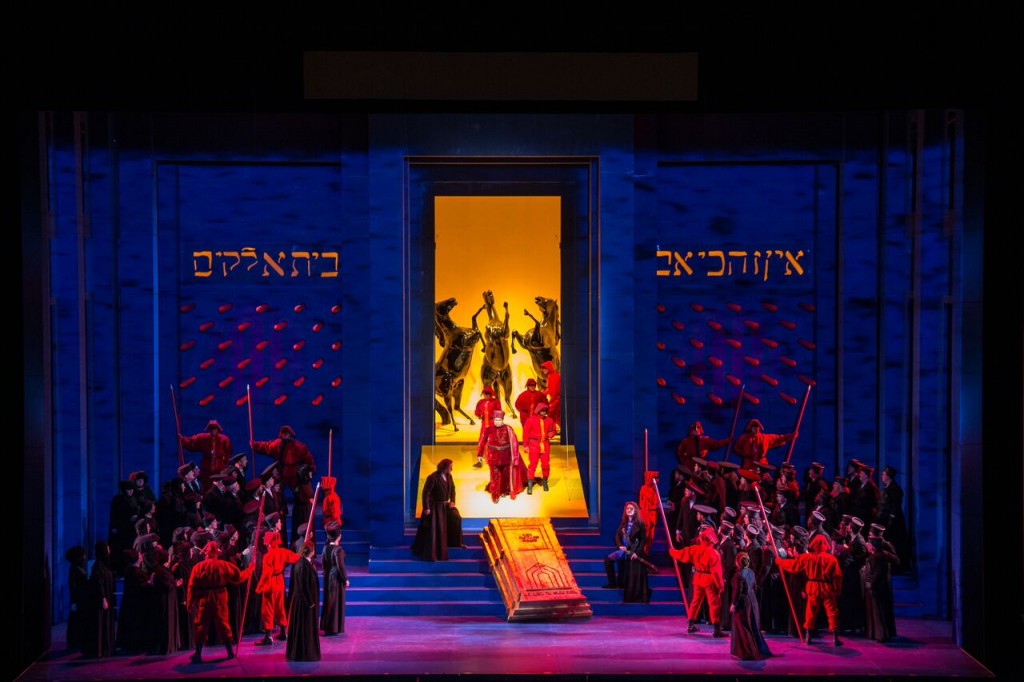 “Nabucco” established Verdi’s preeminence as an operatic composer not only with its winding melodies and passionate declamations but because it struck a nerve with a populace embroiled in the fierce pull-and-push of political unrest.

Director Matthew Ozawa and his design team stretch to frame the competing religions and nationalities with a cast of 120, most playing characters from both sects. Each group is costumed in long, simple robes of sharply contrasting colors with more natural movement for one faction and militaristic for the other. The set consists of steeply stacked stairs, creating much-needed visibility. While these simple solutions are effective, the ensemble’s precise choreography, clutching of skirts and stately scampering as they enter and exit as quickly as possible is less than optimal.

If some of the acting is old-school, the singing is uniformly excellent. In the title role, Željko Lucic spins a luxurious, Verdian legato. As lovers Ismaele and Fenena, Sergey Skorokhodov and Elizabeth Deshong make much of their meager assignments. In the tiny role of Anna, Laura Wilde pops off one effortless high note after another. Bass Dmitry Belosselskiy’s Zaccaria is the delight of the production. He owns the stage and his voice is magnificent and thunderous.

Abigaille is a “big sing,” no matter how you slice the termagant. Enter Tatiana Serjan, a powerful actor with a lavish instrument; if she’s onstage, all eyes must follow her. As was the case with her Tosca last season, I found her introspective moments over lighter orchestration hauntingly lovely, meted out like the finest gold filigree. But once again I found her inaudible at moments when a dramatic soprano should be shattering glass. Rather than blooming at the extreme top, the voice slims. Nevertheless, she paints an arresting portrait.

The healing of the schism between people of warring faiths at this opera’s climax is an election year’s curative. And if Lyric’s fine chorus hasn’t lured you into humming “Va, pensiero” as you exit, you haven’t a heart. (Aaron Hunt)