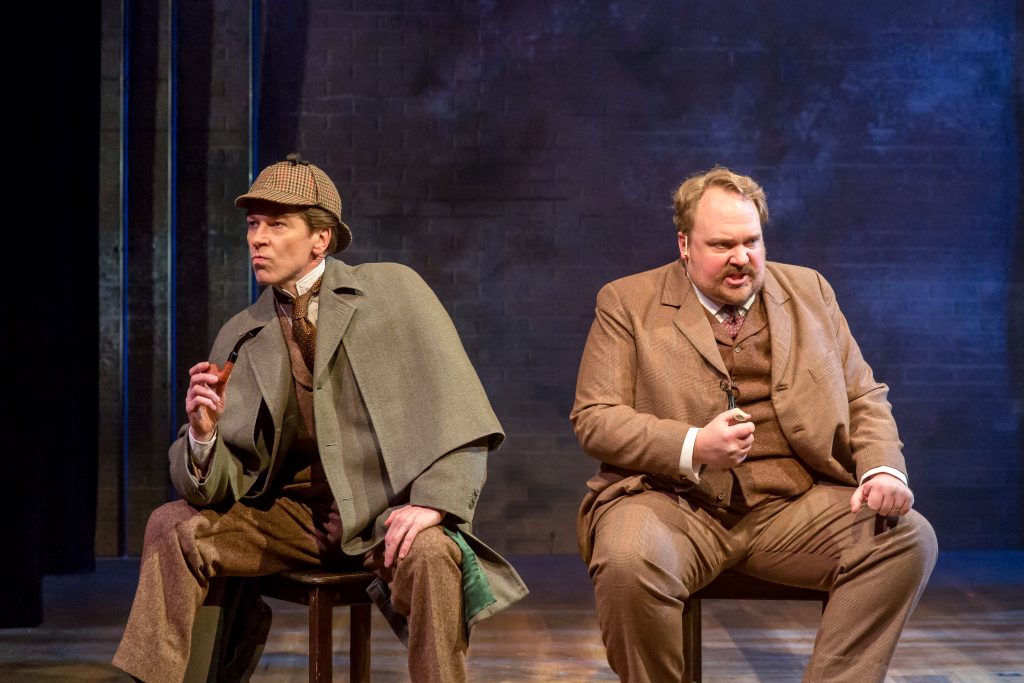 As this sprightly new musical opens, Arthur Conan Doyle has just committed what his myriad readers see as the ultimate crime: killing off iconic super-sleuth Sherlock Holmes. “He’s been smashed to smithereens/And I don’t care a hill of beans,” flippantly sings the Scottish doctor turned writer, who is sick to death of the fictional construct who has overshadowed every other aspect of his existence. Now Holmes, along with his nemesis Professor Moriarty, lies drowned at the foot of the Reichenbach Falls, so that Doyle can live. What the good doctor fails to reckon with is the objections of his own creation, who materializes from a late-Victorian twilight zone to remonstrate with the writer about his premature demise and, incidentally, to help him solve a real-life mystery.

It’s an intriguing premise, with its Pirandello-like paradoxes set against a bleakly realistic backdrop of judicial sadism and racial bias. John Reeger’s engrossing libretto is complemented by witty, period-flavored songs, which were begun by the late composer/lyricist Julie Shannon and seamlessly completed by Michael Mahler. Director Warner Crocker, a mainstay of off-Loop theater in the eighties and nineties, marks a triumphant return with this small-scale but elegantly professional show.

Supported by Yael Lubetzky’s misty, expressive lighting and Scott Davis’ flexible set, Crocker bathes the production in a gentle, knowing irony, without muting the script’s moments of real dramatic impact. Wisely, he focuses not so much on Holmes’ (or should I say Doyle’s) vaunted analytical abilities as his fiercely uncompromising sense of justice, which resonated loudly in an age characterized by rigid class hierarchy and social Darwinism.

Nick Sandys is an impeccable singing Holmes, his every “elementary” aglow with arch self-certainty. Michael Aaron Lindner captures the ambivalence of the Watson-like Doyle, alternately glowering and insecure as the detective story writer playing detective.

The deeper question here is who and what is truly in charge: the artist’s will and ego or the imaginative impulses rooted in the unconscious? Certainly the best works seem more a discovery than an invention. This ingenious depiction of the conflict between author and character feels like it was always there, waiting for this gifted ensemble to bring it to life. (Hugh Iglarsh)