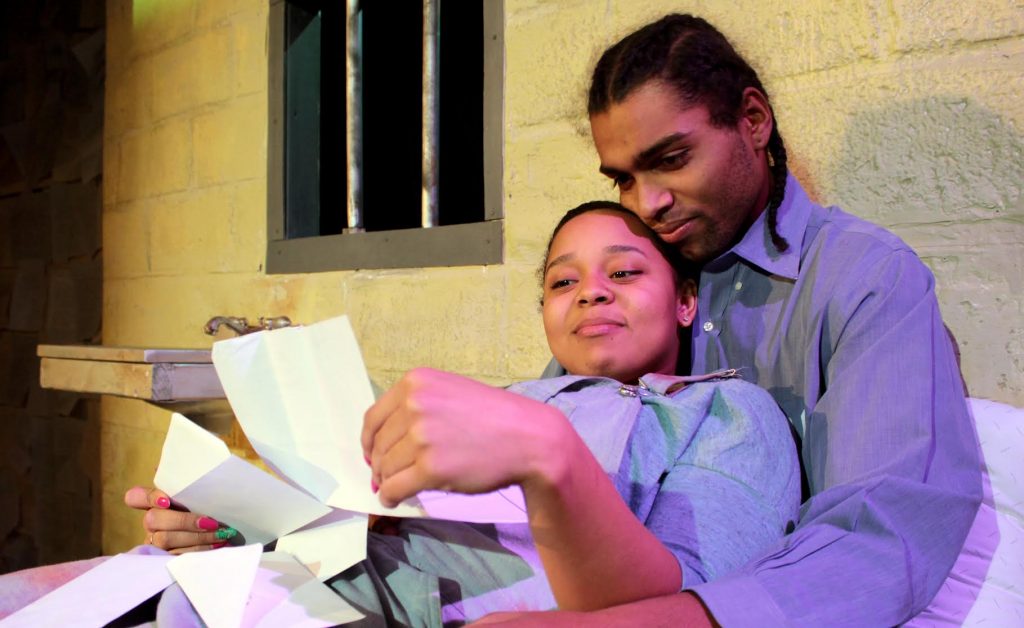 Waking up and turning on the news, we see the outrage over police killings and state terrorism of the black population. We do not see the mass media addressing the more insidious ways systemic racism affects minorities. One of these less-noticed cracks in the justice system: the excessive incarceration rates of young black men.

“Upstate, ” an adaptation of the novel by Kalisha Buckhanon, pivots around the untwining lives of Antonio (Juwan Lockett) and Natasha (Asia Martin) in the aftermath of Antonio’s imprisonment. Pleading guilty of involuntary manslaughter in the killing of his father, the seventeen-year-old Antonio is sentenced to ten years in prison where his life goes on hold. Meanwhile, Natasha’s life moves forward and their letters, while loving, show increasing tension at the weight of their relationship.

Antonio writes about Coney Island, conjuring a carousel on the paper walls. Natasha talks about Antonio’s sweet smells. Martin and Lockett both know how to use the poetry in their words, letting us in on their rose-filled history. For breaths at a time, Antonio’s circumstances seem almost forgettable. He is free from his sentence and a little bit of hope sits in his corner.

Seconds later, Lockett’s lost focus and with it the moment fumbles apart; whatever alchemy created the carousel occurs seemingly at random and these are brief instances. With the sometimes incomprehensible projections and an improvisatory soundscape, the world they’ve created is so very fragile by nature of the choices director Carla Stillwell makes and the inconsistency of the performers. While these are stunning moments of imagination, the jerk back is like crashing through stained glass.

The show’s core component, the dismantling of racial prejudices in our legal system, is ultimately relegated to the backseat. There is never a hard conversation about the nature of justice.  There is undirected anger and nonspecific questions pointed hazily. Antonio seems better for having gone to prison. He seems happier, more peaceful. It looks as though he benefited from those years. And maybe that’s the case for some folks but I suspect the headlines will disagree. (John Van Ort)