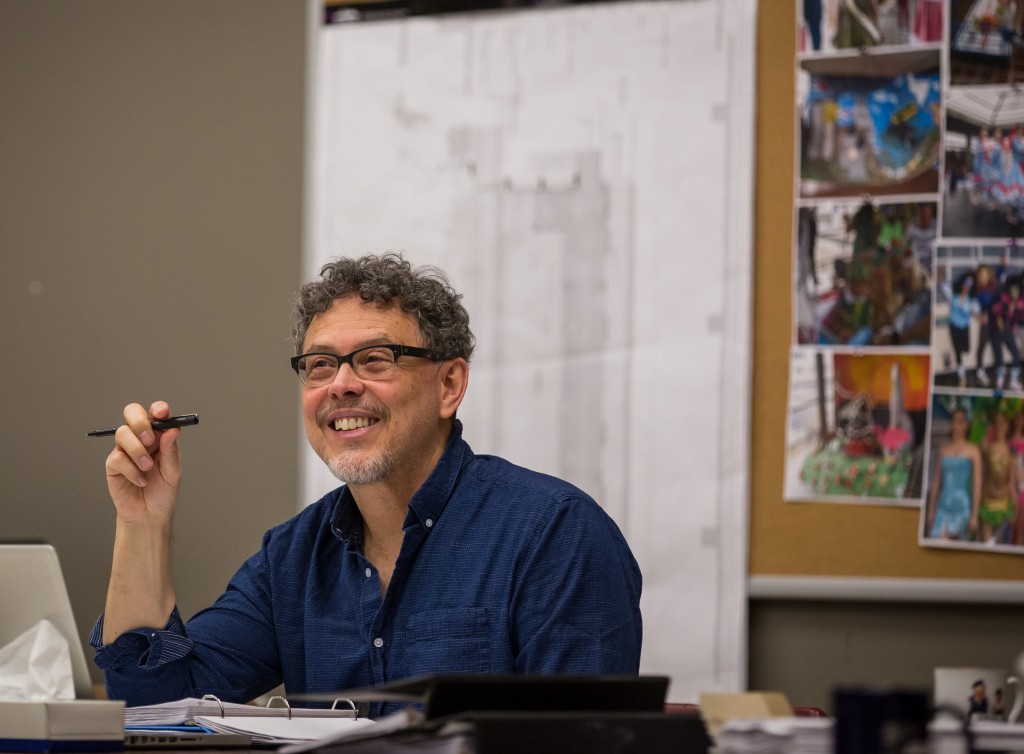 José Rivera in rehearsal for “Another Word for Beauty”/Photo: Liz Lauren

Goodman Theatre’s Latino Festival began in 2003 as a way to highlight the often-silenced voices of Latinos in theater. This year, the now-biennial event is a “Celebration of Latina/o Artists” and highlights the work of two of the most powerful voices in the genre–José Rivera and María Irene Fornés–among others.

“José Rivera is one of our greatest playwrights,” says Henry Godinez, the celebration’s co-founder and Goodman Theatre resident artistic associate. “He is the playwright that my career at the Goodman started with, with the direction of a play of his called ‘Cloud Tectonics’ in 1995. He’s not just one of the great Latino writers but one of the great writers in the American theater. With María [Irene] Fornés…she, like José, is one of the great writers of the American theater but she is a catalyst. She, almost more importantly, has been a great mentor and teacher to a large portion of some of the most important Latino writers today, and yet, she’s not very well known at all.”

The celebration will feature readings and panel discussions of the works of Rivera, Fornés, Isaac Gomez, Roberto Bolaño, Gabriel García Marquez and Eduardo Galeano at the Goodman and other venues throughout the city including The Poetry Foundation, Rivendell Theatre Ensemble, Northwestern University, DePaul University and UrbanTheater Company.

“I’m astounded by the artists that [Goodman] got together,” says Juan Castañeda, artistic director of UrbanTheater Company. “It’s truly humbling to be among that list. We’re all just sharing that similar cause of getting that Latino word out a little bit more…There doesn’t seem to be a weak play in that whole lineup.”

Not only is UrbanTheater Company doing a reading of Rivera’s “School of the Americas,” a play based on the final days of Che Guevara, as part of Goodman’s celebration, they’re also opening their season with Rivera’s “Adoration of the Old Woman.”

“Whether it be Latino or any other minority-based work, it’s always good to have a representation of multicultural voices out there,” says Castañeda. “It is a reflection of the city and the city’s pulse and what the city’s made up of.”

In addition to Rivera’s “Another Word for Beauty,” a play based on the real-life beauty pageant that takes place in a prison in Bogotá, Colombia each year, an adaptation of Roberto Bolaño’s “2666” will be running in the Goodman’s Owen Theatre. This marks the first time that two world-premiere Latino works are simultaneously being produced and performed at the Goodman.

“The dream, for all theater artists of color, not just Latino, is fair representation in the major stages of America,” said Academy Award-nominee and Obie Award-winning playwright Rivera in an email interview. “There are hundreds of eager, trained, talented Latino playwrights (as well as actors, directors and designers) who are marginalized by the mainstream and my dream is to see this come to an end. Latino audiences need to see their stories reflected to them, their stories honored and remembered and accepted as part of the larger American narrative.” (Mary Kroeck)

Program details can be found at goodmantheatre.org/lcelebration