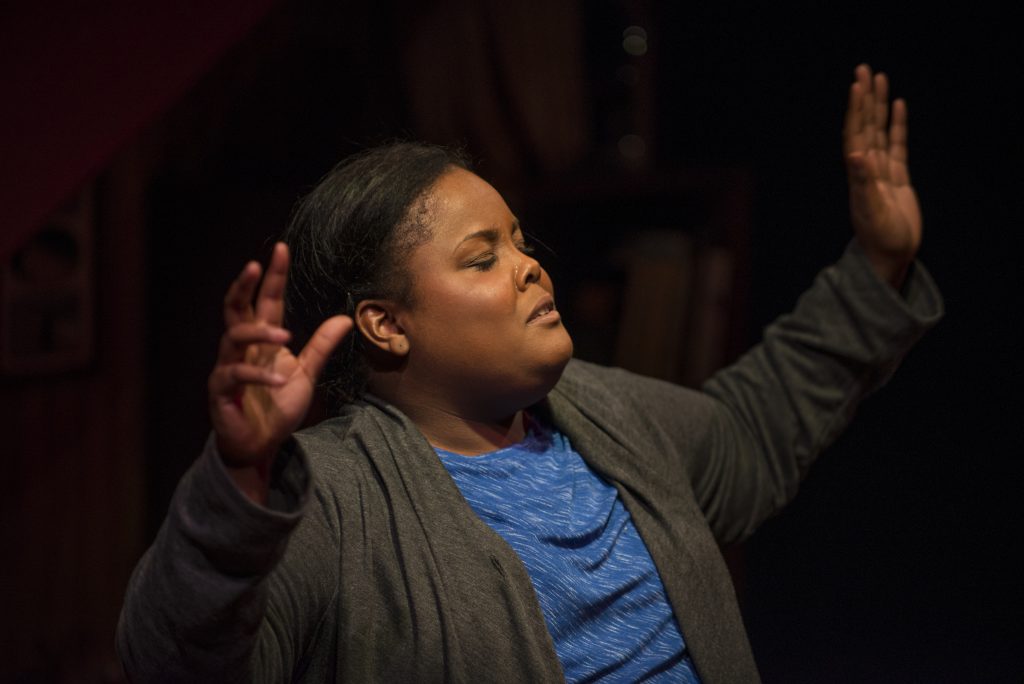 These are some of the politer words applied to people with bodies that don’t fit into our culture’s slim definition of beauty. Personal preferences aside, it would seem that we have unanimously, though perhaps unknowingly, agreed upon some vaguely tall, skinny, pale version of beauty. And yet how often do we consider the psychological effects and homogenizing implications of this pact? Cast off the island of conventional American beauty standards, Danielle Pinnock created her own life raft in performance. In doing so, she discovered that she was far from alone.

Culled from over 300 interviews, “Body/Courage,” which kicks off Rivendell’s “Body Politic” season, follows in the legacy of Anna Deavere Smith. Though Pinnock begins by illustrating her own struggles with weight, she in turn embraces gender, race, age and disability. Serving as an amiable and honest guide, a skilled raconteur with skin in the game, she drops artfully into a variety of characters that range from a proudly bothered middle-school girl to an ambitious track-and-field star. She confronts the manipulative power of sexual abuse, the dictatorial claims of religion and the profound ability of love to muffle the persistent, internalized chorus of “I’m not good enough.”

Pinnock’s performance is evidence in itself of the way beauty emerges from within. Her immeasurable talent is always in service of the story and she approaches her work with humility. She does not seek to erase the words that have been applied to her and so many others but rather invites for her audiences to question what those words truly mean. She is vociferous in citing the help she’s received over the years and has found strong allies in Rivendell Theatre Ensemble and director Megan Carney whose touches are light, professional and intimate.

We are a visually oriented culture, a quality that often lends itself to superficiality. We need voices like Pinnock’s to combat our increasingly immediate evaluations of attractiveness. Entertaining, thoughtful and evocative, “Body/Courage” has substance and heart. And if that isn’t sexy, I don’t know what is. (Kevin Greene)