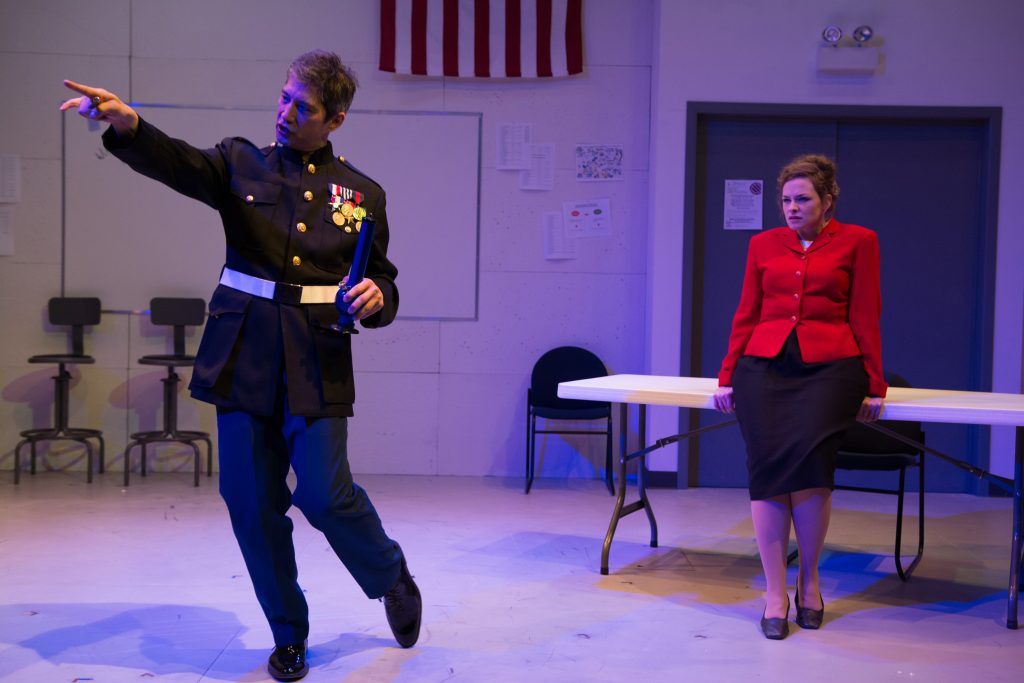 It’s hard to say anything about anything especially if you’re trying to say something without offending anyone. Taking aim at the media machine that filters out crazy-making gobbledygook, “Mutt,” a Stage Left and Red Tape collaboration, skewers the politeness—stemming from each party’s intense desire for race to be a non-issue—that keeps the national conversation about race in such shallow shoals.

In dire need of an identity make-over, the Republican Party decides that reaching out to a racially diverse population is the ticket to survival. They hire Hannah (Aurora Adachi-Winter), a “race-impact consultant.” She makes Republican strategists Miriam (Mary Williamson) and Zach (Ian McLaren) squirm so much that the latter pretends to slip into a coma rather than talk honestly about race. Diagnosing the Republican Party’s problem to be one of perception, Hannah prescribes a “hapa” (Hawaiian slang for “mixed-race”) candidate as the cure that will boost their “optics of racial representation.”

Better than a hapa, they find Len Smith (Daniel Smith), a “super-hapa,” descended from “lots of screwing” across several continents. He is the party’s dream come true: a war vet who’s home anywhere because he is from everywhere but also from a “small town, the same as any other small town… because small towns are small towns.” Running against Len as a “mutt” for the Democrats is Nick Wong (Michael Reyes), whose earnest efforts to talk about race during the elections is squashed by the oversimplification inherent in the “political meat grinder.”

The texture of “Mutt,” directed by Vanessa Stalling, is varied and engaging. Hilarious spoofs of “Hardball” are sprinkled throughout where bombastic guests confuse their bombastic host, Dave Matthews, for that other Dave Matthews. Scene changes bombard the audience with projections mimicking news channels: “RACE RACE RACE” scrolls across the walls of the set while a man yells “BREAKING NEWS! CRAZY CRAZY CRAZY! WHERE AM I? RACE RACE RACE!” It’s funny because it’s disturbingly familiar.

Playwright Christopher Chen’s language is lithe and playful throughout and necessarily so, highlighting the absurdity of political rhetoric and the even greater absurdity of its impact on our world. (Joy Miller)