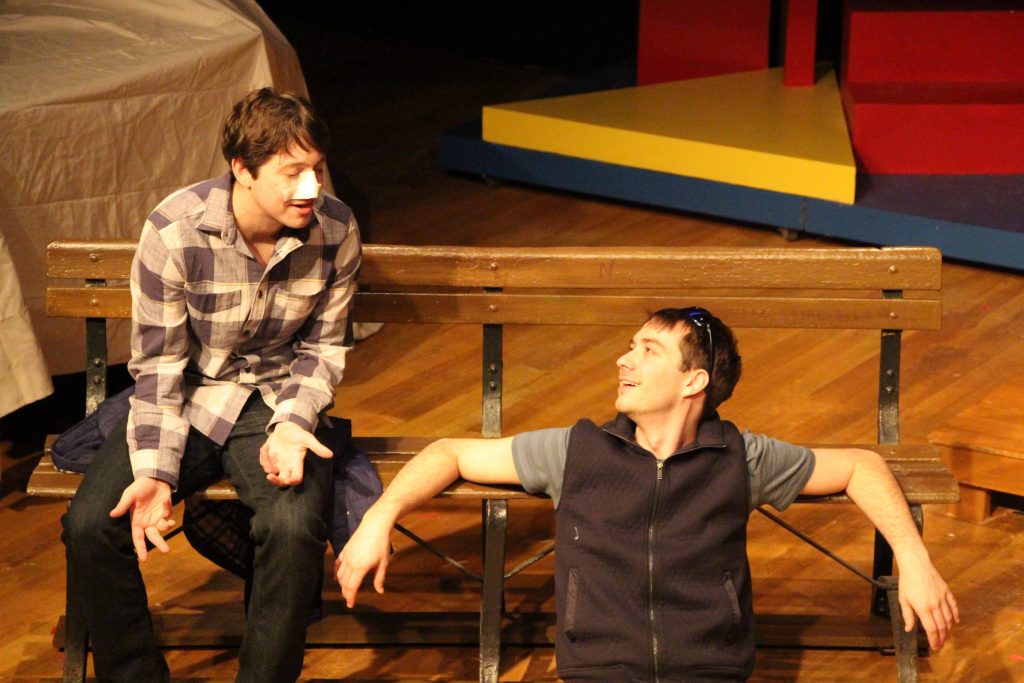 You have quite possibly already seen or heard of Neil LaBute’s “The Shape of Things,” a 2001 play that swiftly became the 2003 movie starring Rachel Weisz and Paul Rudd. Three undergrads and an MFA become romantically entangled in a small Midwestern university setting. LaBute writes the undergrads as stereotypically Midwestern naifs while he crafts Evelyn, the MFA student, to be frank and condescending, an artiste who imagines herself to be in “ruthless pursuit of truth.”

Eclectic Full Contact Theatre’s current iteration of this play sticks closely to LaBute’s script with the exception of the contemporizing injection of social media: a clever addition projected onto screens hovering above the action. Unfortunately, the flashes of Instagram and Facebook documenting plot points throughout the play are only additive, doing little more than tidily pointing out the nourishing link between social media and humanity’s “obsession with the surface of things” as Evelyn puts it toward the end of the play.

The story builds with the swift self-improvement of Adam (Andy Blaustein), which is prompted entirely by his new girlfriend, Evelyn (Michelle Annette). Weight-loss, contacts and new clothes coincide with this once stock nerd’s increased confidence and decreased nail biting. Adam’s newfound suaveness and apparent abandonment of his principles in turn changes the nature of his college-long friendship with the only slightly “cooler” couple, Phil (Josh Leeper) and Jenny (Martha Reddick). Thus things become a little more complicated. Everything hinges on one foul gimmicky twist at the end.

LaBute’s “The Shape of Things” is cringe-inducing not so much because it lays out the cruelty that humans are capable of but because it does so with stock characters and little nuance. Despite this, the cast does a commendable job of developing extremely unlikable characters. This is perhaps easiest for Annette, whose Evelyn is the most arrogant grad student with the most distasteful thesis topic. However, she craftily keeps up her sleeve the secret power of the plot-twist until she seamlessly unloads it at the end of the show. Blaustein manages the trickiest role in the cast, producing the changes in Adam’s character with impressive subtlety. (Joy Miller)