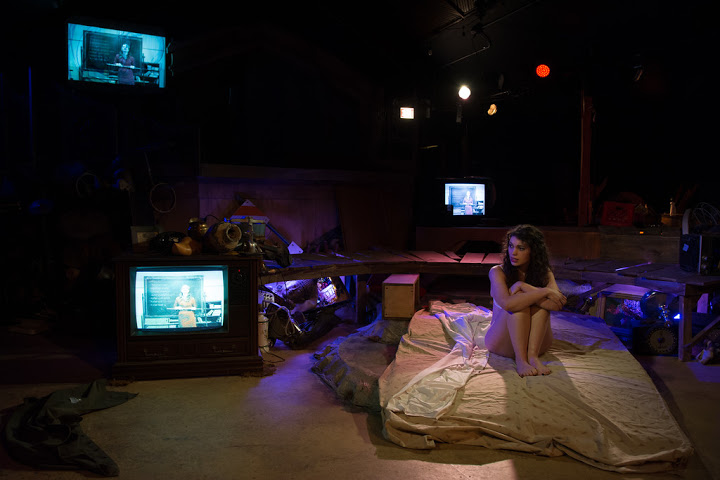 At times, “Estrella Cruz” resembles a collage, a junkyard of ideas that twine together lyrically. Playwright Charise Castro Smith has a sense of dramatic poetry. The playfulness of her language reveals the scope of her talents; her lyricism draws its power from urgent metaphors and the distance between their connecting points.

Those contrasts play at all levels in this production; the plot itself is an adaptation of a Greek myth albeit with some poetic code words dropped in. If you aren’t familiar with the Persephone story, here’s a primer:

Estrella (Allyce Torres) is suddenly dragged down to the Junkyard by imaginary friend Bette Davis (Kelly Opalko) where the emotionally deficient lord of the underworld (Robert N. Isaac) sleeps with her, leaving her pregnant. From there, Estrella’s mother (Tamika Lecheé Morales), inventor of all things, whose face glimmers on the Junkyard TV screens, seeks to reclaim her daughter from the blight of sin. Estrella ignores her calls while feeding her womb.

Out of the gate, things are promising: a coming-of-age tale under the sexist structures running through myths and contemporary celebrity culture. But twenty minutes in, the ideas and images keep coming and there simply isn’t enough time to explore the layers of slut-shaming or objectification before it’s time to move on to motherhood and what it means to have a child. These are cherry-picked from a myriad of other thoughts.

Paradoxically, the very physical reality carries none of that tempo; the actors pick up cues slowly and the space between them isn’t filled with much of anything. None of the actors create a solid perspective in their characters; they are each disparate enough to seem accidentally lifted from alternate versions of the same play. Sometimes these perspectives may be oriented around a specific quality or moment of the play. When these instances arise, the actors’ choices make sense, but they fade quickly.

And that’s what Estrella Cruz is: queen of the junkyard. It seems appropriate that none of these things work together all at the same time. Yet the magic of garbage is when stuff, taken out of context, creates something new. Here, deprived of meaning, we have only curiosities. (John Van Ort)