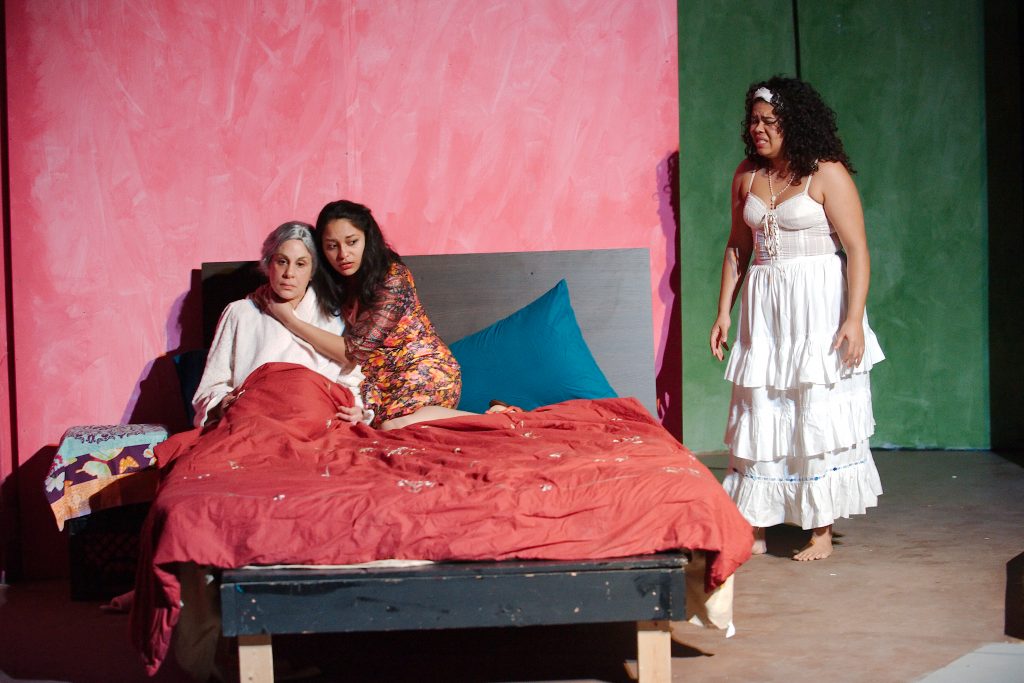 The tenth season of UrbanTheater Company (UTC) kicks off with the Midwest premiere of José Rivera’s “Adoration of the Old Woman.” Directed by UTC artistic director Juan Castañeda, the play is set in Puerto Rico on the cusp of an election that either could make the island the fifty-first state or grant its independence.

Amidst this political turmoil, seventeen-year-old New Jersey native Vanessa (Debbie Baños) is sent to live with her grandmother, Doña Belén (Nydia Castillo), who is somewhere between 100 and 150 years old. Belén is haunted by the ghost of her husband’s former lover, Adoración (Melissa DuPrey). Aside from the ghost, Belén and Vanessa also face a language barrier as Belén’s English is limited and Vanessa was never taught Spanish. The play, however, is almost entirely in English.

Of course, rarely is a play complete without a romantic element. That aspect is brought to us here by two polar opposites. Charismatic, idealistic and college educated Cheo (Andrew Perez) is in favor of Puerto Rico governing itself. Businessman Ismael (Armando Reyes), who grew up with Cheo, is in favor of statehood. They both have feelings for young Vanessa.

Baños, Castillo and DuPrey all have their moments of joy against otherwise grim circumstances. These actresses are as heartbreaking as they are humorous. In the end, they are all tied together by their pasts and their inability to let go of them. They are truly the driving force of the show.

Where this production seems lacking is in its set and sound design. Transitions are met with blackouts and no sound. The set seems almost too pretty for supposedly being a run down home. Given that Rivera is known for using elements of magical realism in his shows, the set and sound don’t reflect that quality as much as they could. Thankfully, the acting makes up for the scarcity of magic. Each performer is as bright and colorful as the set’s walls. (Mary Kroeck)