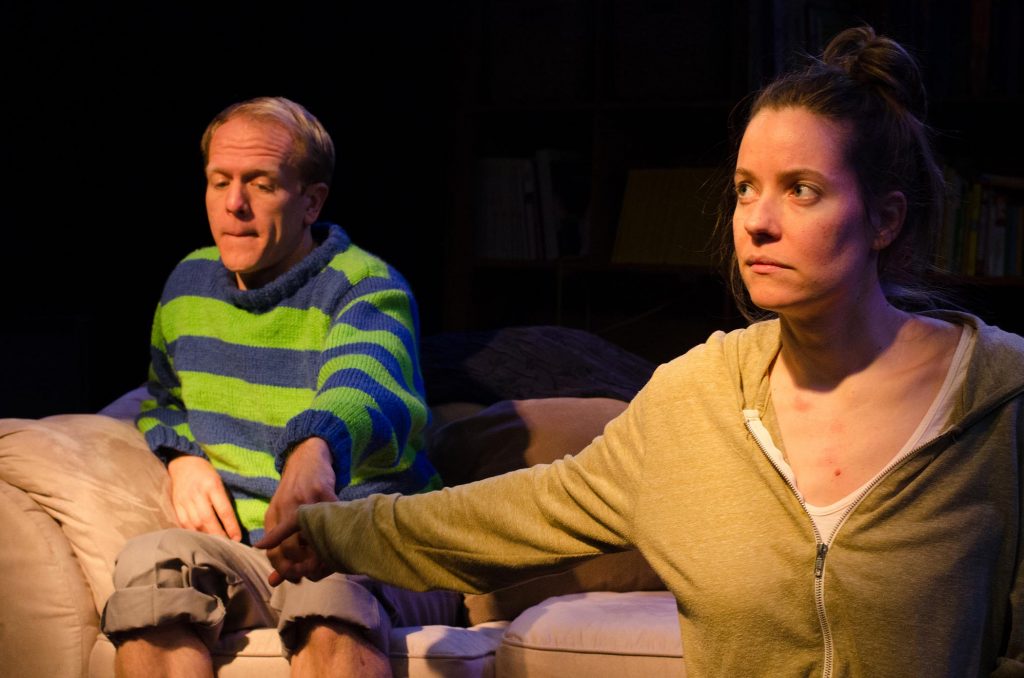 Lauren Yee’s “In A Word” will leave you in a poetic state of mind. You’ll find yourself grasping for ways to describe this manic work that will ultimately fall short of the breathless experience of witnessing it. Despite that, here is my best shot: “In A Word” is like a flourless chocolate cake. From the outside it may not look like much, but as a sensory experience it is rich to the point of being almost too much to bear.

As a work of writing, “In A Word” is like Dr. Seuss and William S. Burroughs collaborating on a sequel to “Rabbit Hole.” It is lyrical, pitch black and regularly disarming. It is abstract but not surreal. It is far more like a panic attack than a hallucination: everything is in desperately sharp focus.

Jess McLeod directs with airtight confidence. At her service is a trio of vigilant actors as well as the wily technicians of Strawdog who represent the crème de la crème of storefront ingenuity. Mary Winn Heider is particularly excruciating as the bereaved mother who can’t embrace the present anymore than she can let go of her past.

Within a constantly shifting tonal landscape, Yee’s characters are obviously running away but what they’re running toward is far less clear. While one doesn’t usually pause to consider the whys and wherefores when trying to outrun the splintering ground of memory or the ferocious wolves of guilt, “In A Word” could nevertheless use a break.

Words play a tricky, deceitful role here. They are roots and branches, providing cover but also tripping characters up. Yee’s playful and sophisticated linguistics occasionally get in the way of her play’s emotional impact. While she is plenty capable of turning colloquialisms and metaphors brilliantly on their head, there are moments when these poetic inventions stop serving the plot and start serving another fickle master: the playwright herself.

Yee’s presence in “In A Word” is less evident than in, say, “King of the Yees.” Yet it still feels like she needs to put some distance, figurative and otherwise, between herself and her work. (Kevin Greene)