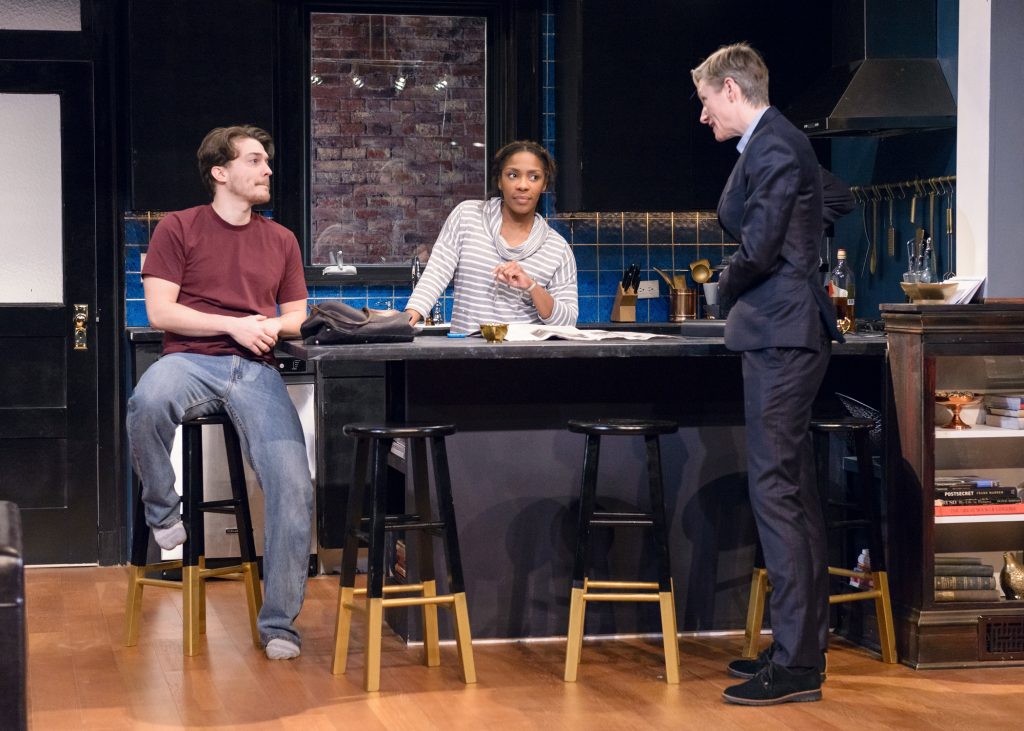 In the gun debate there are only two sides to choose from. Either you stand with those who hold the Second Amendment sacred or with those that believe guns are the root of all evil. There is no area of grey, no exceptions, no alternatives and no fences on which to stand. The choice is simple, you either get on the bus or you get off. In her dynamic and necessary world premiere at Victory Gardens Theater, Sarah Gubbins has graciously chosen to get off.

Through the lives of Taylor (Kelli Simpkins), her girlfriend Izzie (Patrese D. McClain) and her brother Frank (Mike Tepeli), Gubbins demands that we closely examine the flawed two-tiered system of the gun debate and realize it’s not that straightforward.

Taylor, an attorney, comes home from work to find her brother Frank in her apartment. Frank is funny, charismatic, a great fixer… in his own mind at least. He leads with greatest of intentions. It’s those intentions that win him the compassion of Izzie. Izzie believes that Frank’s fixer-or-not-so-fixer skills can help them before the walk-through of the condo they are attempting to sell.

It is then we begin to learn of the larger issue. There is an ex-Marine neighbor who passive-aggressively terrorizes Izzie with his constantly barking dog and loud video games as well as his brandishing of firearm literature in the lobby. After Izzie explains her deep frustration and fear about this neighbor to Frank, he suggests that she has to protect herself. He offers to sell her a gun. Being a gun violence activist, there is a moral dilemma she struggles with. It is at the point of that transaction that the play’s true message and heart peeks through.

Under the airtight direction of Joanie Schultz and with praiseworthy performances from the entire cast, Gubbins masterfully uses simplicity to make us question the side we thought we so confidently stood. (Loy Webb)