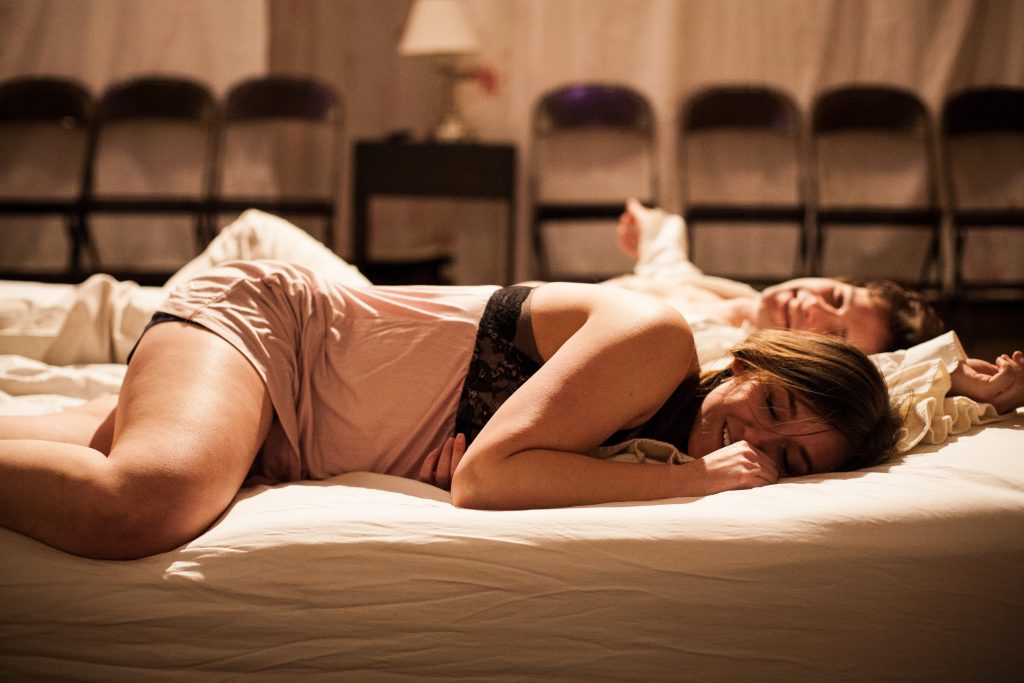 Let’s start here: all the stuff you’ve seen and read about Romeo and Juliet was fake, an elaborate ploy so that the pair could run off to Reno together. Juliet (Jillian Rea) is horny and bloodthirsty as hell while Romeo (Christopher Waldron) is a little reticent about the whole thing. He catches glimpses of their former love and finds a movie marathon dedicated to them. Juliet scoffs it off as an insincere interpretation of the pair and demands that they be known for who they really are: the Star-Crossed Killers. So they begin sticking up gas stations and killing to repossess their names. In the meantime, the Prince of Verona (Nathaniel Fishburn) hunts them down in order to return them to their proper story.

I didn’t particularly like “From These Fatal Loins,” despite a number of things working in its favor. The run-time is speedy, it’s an easy one-act with plenty of laughs albeit also a significant amount of cringing. The cast is quite strong. In particular, Rea’s Juliet and Kyle Encinas’s Friar Laurence maintain strong energy and a commitment to the absurdity at hand.

Rea rarely missteps; she’s a powerful actor and never judges her character’s libido, entrenching herself deeper in the teen’s want for freedom, authenticity and the trappings of adulthood. Unfortunately, Juliet can be a little bit too petulant and cruel to like, undermining the impact of her long arc.

If you take all this at face value, it can still be a fun play. But the end takes a brutal, philosophical tone: the Prince tells them to leave Reno, return to the ending that Shakespeare wrote for them, and die in the way he intended. All of which feels paradoxical given that this is essentially fan fiction. The point of this play was to offer these characters the chance to live life like they wanted, in a way playwright Dan Caffrey perceived beyond the original. Caffrey had every opportunity to write a romance as compelling as Romeo and Juliet. Instead, he asked a hypothetical question and then proceeded to tell us that what-ifs are stupid because nothing can be as good as the original.

And that makes me wonder why I watched this instead of another “Romeo and Juliet.” (Jay Van Ort)