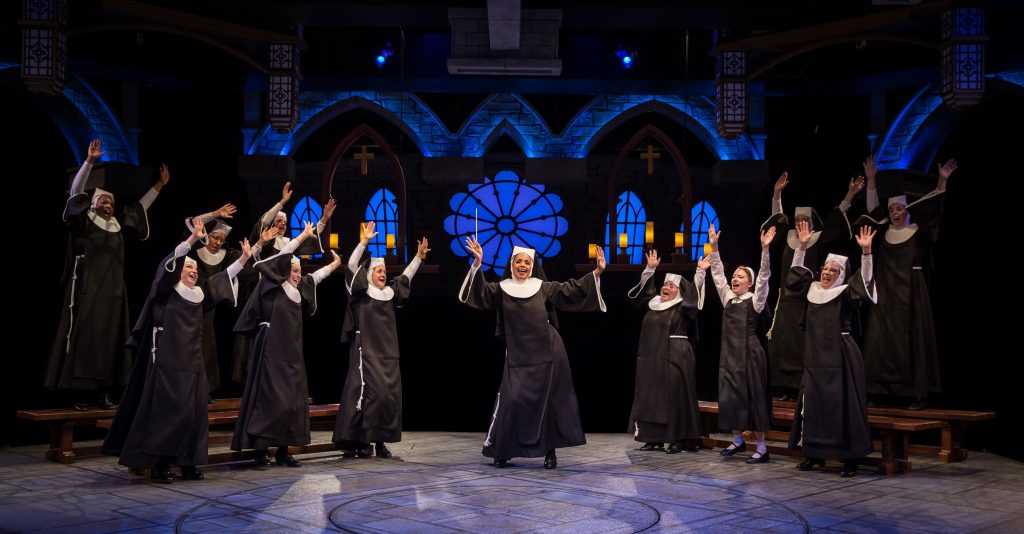 If you’re coming to the show expecting a reenactment of Whoopi Goldberg and company’s feel-good film where a wayward woman finds God and changes her life as well as the lives of others in need, you’ll be disappointed. However, if you can forget what details you might remember of the 1992 movie of the same name, you might like “Sister Act” at Marriott Theatre directed by Don Stephenson.

I have mixed feelings about “Sister Act.” Most of the things I disliked were issues with the show itself, not this production of it. For example, “When I Find My Baby,” one of the show’s musical numbers, contains the lyrics “I’m gonna shoot that girl! And then I’ll stab that girl, and then I’ll take her and shake her and make her meet her maker!” These words are set to a fun disco beat and silly choreography that many audience members got a good laugh out of. I did not. There are also occasional lines that have undertones of racism and prejudice that are supposed to serve as comic relief that didn’t leave me amused. However, the trials and tribulations of sisterhood are well captured in catchy tunes like “It’s Good to be a Nun” and “Sister Act.”

The acting and singing are good overall and include strong performances from Hollis Resnik (who reprises her 2011 role as Mother Superior in the regional production) and Stephanie Umoh (as Deloris Van Cartier). Jonathan Butler-Duplessis as officer Eddie Souther really stands out. His vocal quality is great and his take on Eddie as a sweet, shy and tough crime fighter played well with the audience.

I also really enjoyed the lighting (designed by Jesse Klug) and set design (Thomas M. Ryan) from start to finish. The church settings are solemn and the scenes outside the convent walls are presented with the right amount of contrast. Being in the round, there is a certain intimacy to this production as opposed to a traditional proscenium stage that works in its favor.

Though there are some really sweet moments in the show, I have to admit that I wish the musical was more like the movie in a lot of ways. (Mary Kroeck)