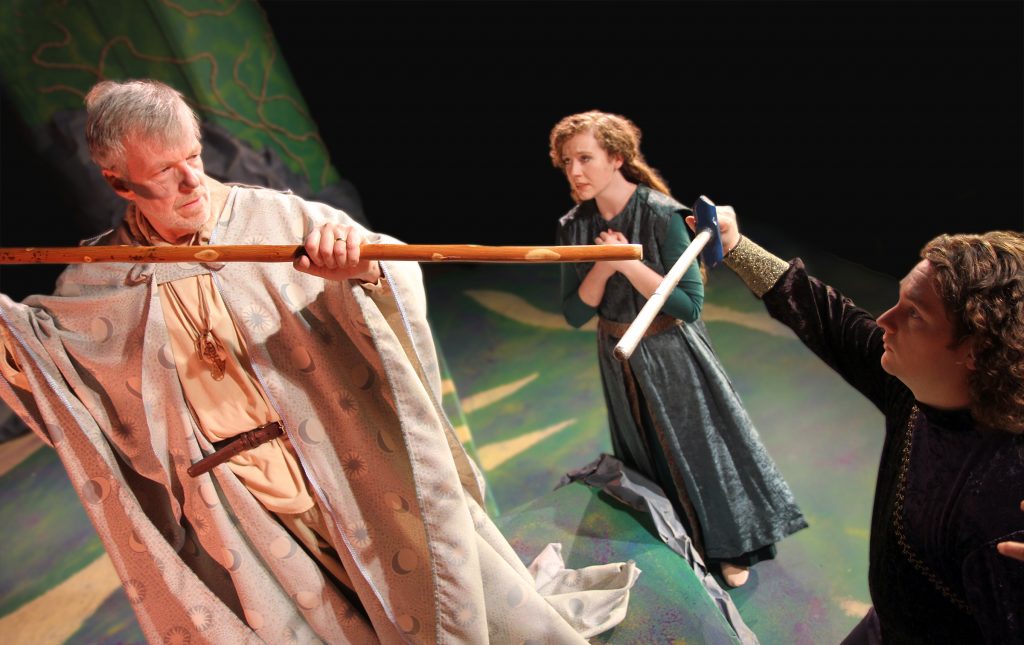 Shakespeare’s problematic play “The Tempest” is a heady undertaking for any theater company. Never mind the need to replicate an onstage shipwreck. Culminating in the playwright’s lifetime exploration of characters and their larger languages, this play has so much story to tell that a focus must be chosen, a single doorway that opens into the story of the director’s understanding.

Director Jim Masini wisely chooses to approach the play as a gentle allegory, making good use of the company’s intimate playing space. Cortney West’s set is rustic yet magical, lighting designer Travis Triplett’s work is simple yet effective and Aaron Harris Woodstein’s sound design is compelling, if at times a bit over-effusive.

The roles of Prospero, Ariel and Caliban present particular casting challenges and this production has managed the task neatly. Bill Chamberlain’s Prospero is well-spoken, more elder-statesman than brimstone-hurler, in keeping with the production. As fleet of foot as of speech, Maya Schultz’s Ariel is a constant delight. This story can come unglued with a poorly elucidated Caliban, but Shamus Jarvis’ sensitive portrayal brings the imperative equilibrium.

The character of Miranda is a bundle of contradictions, leaping quickly from horror to girlish glee and from hate to love. Alexandra Cross speaks prettily. If she was slightly forced in the opening moments of the play the night I saw it, she relaxed beautifully and did much to enlighten the whirlwind of a woman on the cusp of her majority. The role of Ferdinand seems almost a plot-device: merely a prince who falls in love with the princess who is central to the tale. Kevin Lambert is handsome, ardent and plays truthfully, supporting rather than overbalancing his scenes.