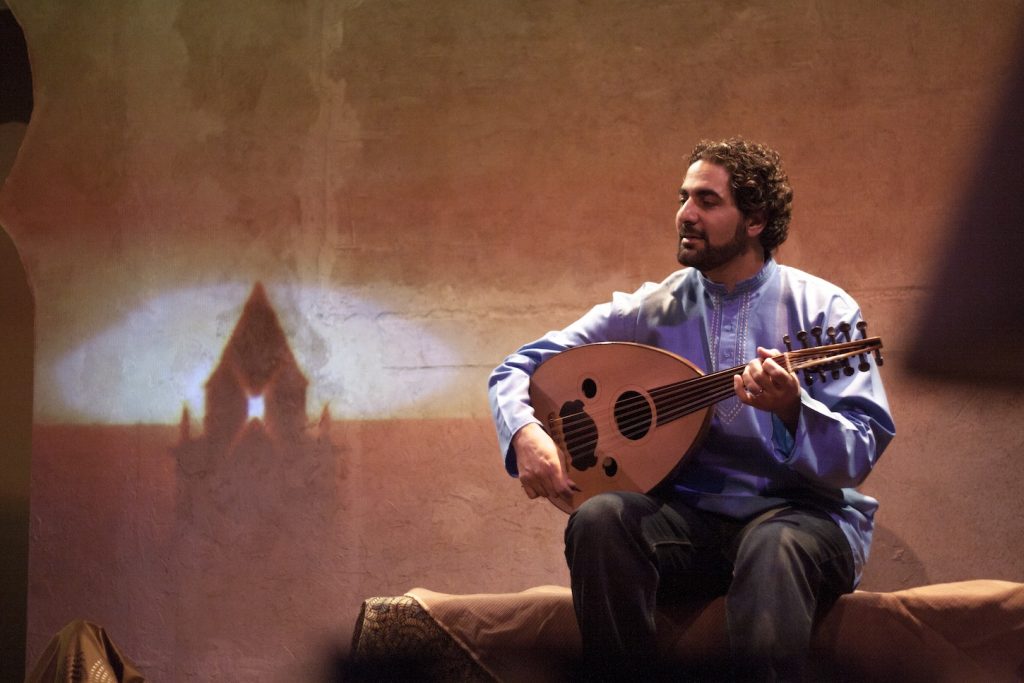 A stage swathed with oriental rugs. On it a tambourine, a tape deck, a table lamp, a silicone-sleeved glass water bottle, an electric guitar, an amp and a suitcase. Harmonies: racial, religious, cultural and, of course, musical resonating across centuries. A hero who’s fashion-forward, swell at cooking and handy with a lute. “The fifth string is the soul,” announces Ronnie Malley, finessing an oud as the lights come up on Silk Road Rising’s “Ziryab, The Songbird of Andalusia,” which is as multifarious and miscellaneous as its titular polymath could desire.

Written and performed by Malley, “Ziryab” is part biography of the ninth-century Iraqi turned-Cordoban-court-entertainer otherwise known as Abu al-Hasan Ali Ibn Nafi; part autobiographical account of Malley’s experience as a Palestinian-American Muslim growing up in Chicago; part nostalgic history of the peaceful coexistence of Christians, Muslims and Jews in the flourishing of the seven centuries of Moorish reign of Andalusia; and part ethnomusicology lesson that playfully points out echoes of medieval Arabic music in late-twentieth-century heavy metal guitar solos.

The collage makes sense the way “One Thousand and One Nights” does: one tantalizing association at a time. Malley leavens a potentially death-riddled mystery with an insouciant approach to anecdotes that anchors his performance in the earth of Chicago’s standup roots. His memories of fending off the racial obtuseness of his Midwestern peers salts a paean to an utopian past with the grit of contemporaneity.

“Music is how I experience the divine,” he says. The oud, as he points out, evolved into the Greek laouto, the Cuban laùd and the guitar, is the pivot on which the piece as well as all its plays and players turn. In a brisk ninety minutes, Malley is a one-man band of remarkable ingenuity, moving through accents and centuries with agility while tossing off riffs from Guns N’ Roses’ “Sweet Child O’Mine” and Compay Segundo’s “Chan Chan.” He sings the Hafiz ode, “I see the moon in the face of my beloved,” and transforms from emir to courtier to slave just as the chameleonic Ziryab doubtless would have done a millennium ago. Chronicling the life of the refugee, exile, wanderer and idealist, “Ziryab” makes Malley a medium for cultural resolution then and now. (Irene Hsiao)