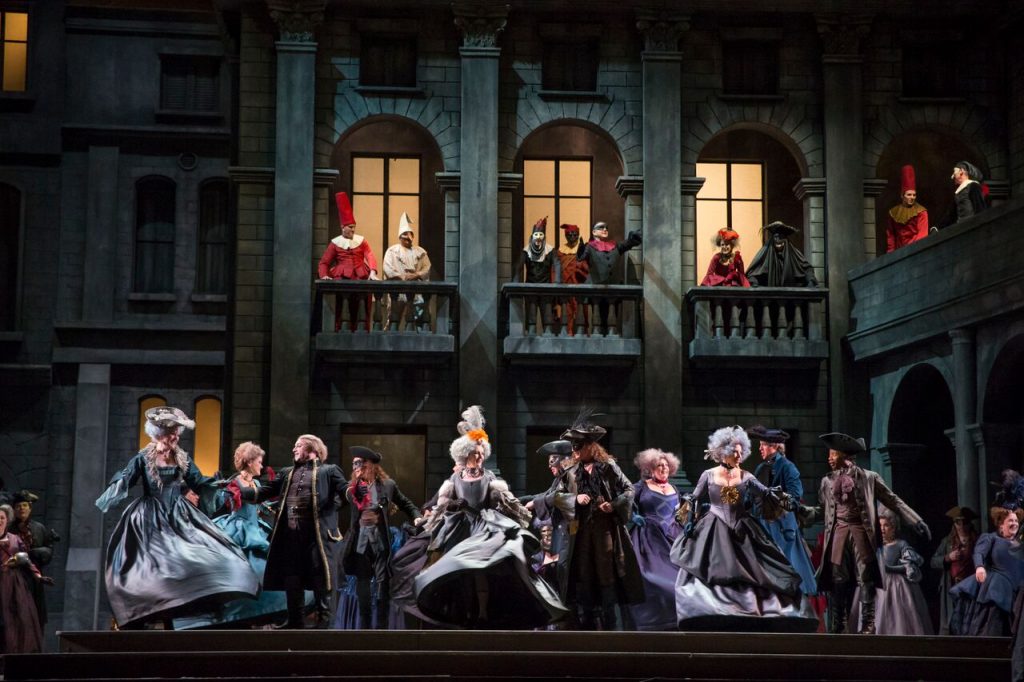 The cast of “Romeo and Juliet”/Photo: Todd Rosenberg

Perhaps best known for the heroine’s waltz song, which arrives in the first act and isn’t quite equaled for sparkling melody thereafter, there is still much music to savor in this operatic tragedy. In director Bartlett Sher’s hands, this production is both a feast of grand opera and a cinematic story that invites the uninitiated to take a seat at the table.

Sher leaves Lyric’s famous curtain up at the top of the show. Set designer Michael Yeargan’s stunning silver-grey columns, porticos and the imperative balcony chill as the audience enters. Adorned in Catherine Zuber’s costumes, both subdued and sumptuous, the cast begins to enter in complete silence, and the effect is hair-raising. The opening prologue is sung with the entire cast onstage. Such portentous vibrations will linger long in the memory.

The supporting players bring considerable verisimilitude to this production. Jason Slayden (Tybalt), Joshua Hopkins (Mercutio), and Takaoki Onishi (Paris) project both the emotional and corporeal suppleness of youth. Their easy physicality stands them in good stead as they realize the expectations of Sher’s direction, Chase Brock’s choreography and B.H. Barry’s unrelenting fight designs.

It is difficult to believe Philip Horst’s spry Capulet when he insists that he no longer dances, while Deborah Nansteel’s bawdy nurse reminds us of one of Shakespeare’s favorite tropes. David Govertsen’s Duke of Verona is authoritatively sung and acted. As the page Stephano, Marianne Crebassa flits like a pixie and charms all with her serenade. Christian Van Horn’s Friar Laurence is anything but retiring, his artistry and sonorous voice continuing to grow in star-wattage.

Joseph Calleja sings splendidly, reminiscent of Alfredo Kraus in quieter moments, although this active production is not always his friend. Susanna Phillips’ Juliet seemed to suffer by default, and her glittering voice lacked its usual ease when I saw the production.

Chock-full of dancing and swordplay, this “Roméo et Juliette” asks much of its artists, delivering a lavish close to Lyric’s 2015/16 season. (Aaron Hunt)