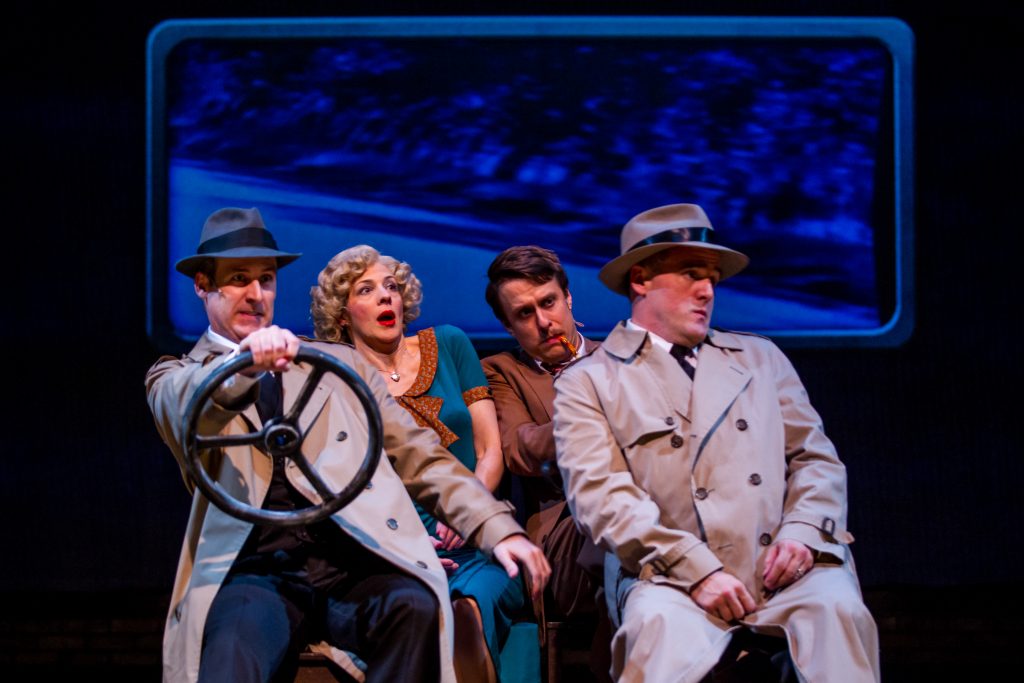 One night, Richard Hannay, a dashing thirty-seven-year-old Londoner with a fine pencil mustache, finds himself so filled with ennui that he does what any other reasonably bored fellow would do: he goes to the theater. London Palladium, to be precise. There he becomes abruptly entangled in a fantastically suspenseful spy adventure. You might well know the details of that adventure if you’ve read John Buchan’s 1915 thriller, “The 39 Steps,” or, more likely, if you’ve seen Alfred Hitchcock’s 1935 suspense film of the same name.

Patrick Barlow’s 2005 play converts much of the suspense and thrill from Hitchcock and Buchan’s versions into pure comedy by toying with tropes and smartly displaying the antics of four actors craftily playing dozens of roles. Now at Theatre at the Center in Munster, “The 39 Steps,” directed by David Perkovich, overflows with visual gags, charming Hitchcock allusions and constant physical humor, so much so that militant attention is necessary or else disappointment will settle when you hear the audience laughing and realize you’ve missed the joke.

This impressive layering of humor is particularly playful due to the highly poetic use of props. Hiding out in a farmer’s cottage, Richard Hannay (Matt Mueller) picks up a frame that becomes a window through which he sees the police waiting for him. The farmer’s wife tells him to escape through the window and when he starts to, she grabs the frame from him and runs it to the front of the stage, holding it up there and shouting, “No! The Rear Window!” Hannay then yanks the frame from her and shimmies through it vertically, like someone passing through a hula hoop, after which the farmer’s wife picks it up again and holds it in a more window-like fashion so that she can look longingly at Hannay’s escaping form. The transformative looseness of this prop is deployed throughout the production and one never tires of it.

Though there are a few moments of physical comedy that repeat enough to be tiresome, these are overwhelmed by the general momentum of hilarity that builds pleasurably till the end of the show. (Joy Miller)