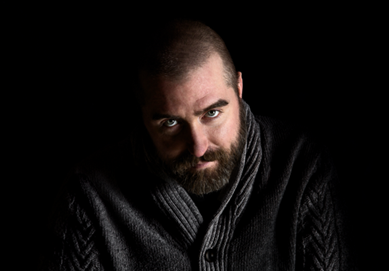 The darkest days for Michael Patrick Thornton began in the immediate aftermath of the spinal strokes that left him paralyzed and comatose for three days in 2003. Thornton then underwent extensive therapy at both the Rehabilitation Institute of Chicago (RIC) as well as at his home in Jefferson Park. This almost daily therapy lasted sometimes for as long as six hours and would sometimes entail Thornton reading aloud Shakespeare’s soliloquies and sonnets in an effort to help regain breath control and relearn how to project his voice without passing out at the end of a sentence. Thornton found this somewhat comforting as some of his earliest theatrical accomplishments, prior to his injuries, involved Shakespeare.

Although he has regained some of his previous abilities, Thornton still performs on stage in his wheelchair. When asked the extent of his physical limitations, he stated that he is a “C4/C5 incomplete quadriplegic” which means he has limited mobility in his limbs. When talking about himself, though, Thornton is quick to add that he is no more defined by his limitations than he is by his love of good IPA, pinot noir and thin-crust pizza.

In March, The Gift Theatre will kick off its fifteenth season with a dramatic interpretation of “Richard III.” Thornton, co-founder and artistic director of The Gift, stars in the title role. The production will include an extensive amount of assistive therapy and technology donated by the RIC. While Thornton and the RIC are coy about exactly what this technology entails, Peggy Kirk, senior vice president and chief clinical operating officer for the RIC, indicates that “Michael will be empowered to play ‘Richard III’ with various tools—from a wheelchair to a walker to more novel technology. This will not only allow Michael to express himself as an actor as never before, but will also uniquely present Richard’s variable identity and character.”

Director Jessica Thebus sees this technology as enhancing the story by helping Richard project an extension of his body that he uses at different times for different purposes in order to advance his self-interests. The devices then are used by Thornton, according to Thebus, “in order to create and maintain a mutable identity.”

Thornton, for his part, is “excited as hell” to be part of this production in large part due to its more nuanced exploration of what a disability entails. In his view, today’s society is quick to see disabled persons as inspirational without ever acknowledging “the uglier side of loneliness, rage and disappointment.”

In Richard’s time, however, he would have had to contend with an altogether different viewpoint where a person’s outward reflection was perceived as a true reflection of their soul. Within this context, Thornton sees the assistive technology used in “Richard III” as a way to “project power vertically” and draws an analogy to Franklin Delano Roosevelt’s attempts to hide his disability from the public. In Thornton’s opinion, Richard is a similar politician “simultaneously trying to give society what they expect from a leader but at the same time commenting on this expectation.”

The familiar role often has an able-bodied actor portraying the physically limited king. Here, that tendency is reversed with Thornton able to use his own experience to better flesh out the iconic villain. In talking about this, Thornton states that he does not see Richard as a villain at all but rather “a man who’s never been afforded a chance to be good.”

This absence of an opportunity is something that resonates deeply with Thornton, especially in regards to the lack of roles available for actors with physical disabilities. Thornton is quick to point out that many an able-bodied actor has won an award for pretending to be disabled “while the opportunity to even audition for disable-identified roles is so depressingly abysmal.”

Michael is eternally grateful to the RIC which he credits with helping him to relearn how to talk, move and, in many ways, live again. His relationship to RIC, which began as a patient, has evolved to the point where he is now a member of RIC’s Foundation Board. Thornton’s hope is that RIC’s involvement in the production will help to put a fresh face on a world-renowned institution that has made his continued career in the arts possible. In doing so, Thornton hopes to reimagine “Richard III” as well as the very nature of human ability.