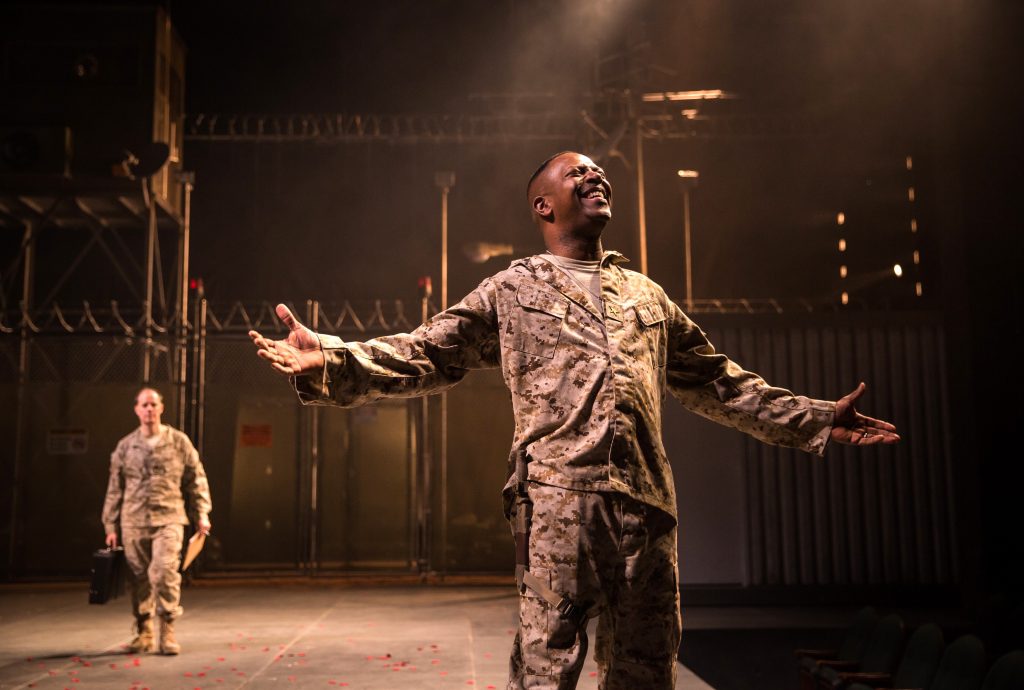 Chicago Shakespeare Theater’s “Othello” is a man’s play in a man’s world. It opens with Iago and Roderigo, average white dudes in baseball caps and leather jackets, talking smack about the Moor Othello and heckling aged skinhead Brabantio about his wayward daughter Desdemona’s proclivity for dark meat through the intercom system of his cement-block apartment complex. Men are lewd, Shakespeare never hesitates to remind us in a play that presents miscegenation, cuckoldry and adultery as its primary anxieties. The men in this production, directed by Jonathan Munby, make sure we know it, particularly Michael Milligan’s sneering, overemphatic Iago, who manically mimes everything from tupping an ewe to putting money in one’s purse.

The action of the play occurs in a modern-day, presumably American military camp, where the strict pageantry of salutes and sober hierarchy hovers lightly over a situation constantly on the verge of acute fulmination. Whether erupting in violence or campy renditions of “You’ve Lost That Loving Feeling,” such juxtaposition highlights the absurdity of any group governed by an excess of testosterone.

Circulating through the camp are the three women who can do nothing for themselves but whose actions nevertheless contribute to the tragic inevitability. Othello’s mate, Desdemona (Bethany Jillard), is a frivolous presence, blonde and bosomy, prancing about in platform heels and diaphanous dresses under her bulletproof camouflage vest, a Michael Kors bag slung over her arm. Her foil is the doughty Emilia (Jessie Fisher), plain-faced, with stick-straight hair and an almost embarrassingly earnest way of delivering her lines with schoolgirl scrupulousness as she blindly obeys her husband Iago’s will, which grows into the source of her strength at the climax of the play.

The wives model versions of innocence that have no opportunity in the competitive, yet brutally convivial world of their husbands; the harlot, Bianca (Laura Rook), looks like a spokeswoman for Aqua Net and Sally Hansen, yet she proves true to her unworthy beloved, Cassio (Luigi Sottile). The men are nondescript doubles of each other, since they invented and uphold the systems of power that make it a world no one can live in.

As the ill-fated Othello, James Vincent Meredith is first noble and then deranged with the paranoia of betrayal planted by the ensign Iago, who is as evil as the sick rage of our cultural id. (Irene Hsiao)