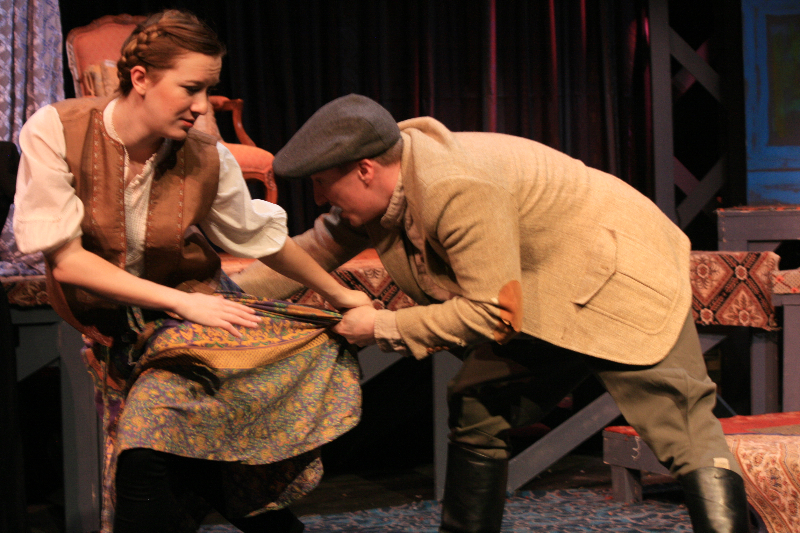 In Chekhov’s “Three Sisters, ” written in 1900, the universal goal is to be in Moscow. In Mikhail Bulgakov’s “Zoyka’s Apartment,” written a quarter-century later, there’s hardly a character who doesn’t dream of getting the hell out of Moscow. In the interim was the Russian Revolution, which changed everything except human nature. Bulgakov depicts the post-revolutionary period as a pandemonium, at least for the old elites, who will do whatever is necessary to get to Paris, where they can stop apologizing for their refinement. In the meantime, in Zoyka’s large, once-elegant flat, these déclassé aristos drink and carouse, creating a decadent counter-reality to the overweening righteousness of the Soviet state.

This intriguing scenario is sadly wasted in Bluebird Arts’ slack and silly production. The wheels come off early in this botched farce, with its ineptly translated script, incoherent direction and overheated acting. Everyone seems to be doing his or her own thing on stage, and few of those things–with the exception of Doogin Brown’s sleazily charming pander–are particularly funny or revealing.

While the play isn’t at the level of Bulgakov’s masterpiece, “The Master and Margarita,” it does shed light on the “New Economic Period,” the interval between the Civil War and the Stalinist era. In response to the ravages of the war and general backwardness, the Communist regime encouraged private enterprise while simultaneously clamping down politically. The economy grew but at the cost of corruption and hypocrisy, embodied in Zoyka’s daytime “sewing school” for proletarian women, which covers for a glamorous, lucrative bordello.

This is the nub of the satire, that beneath the façade of the workers’ state lie the familiar patterns of privilege and opportunism, with commissars rather than counts at the top. But without dramaturgical support, the moral is lost. Also unaddressed here is the odious racism embedded in the character of Cherubim, a Chinese caricature who makes Fu Manchu look PC.

With its themes of cultural confusion, bigotry and con artists in high places, “Zoyka’s Apartment” simmers with potential relevance. Too bad the play has been turned into a slow-moving, awkwardly raunchy fashion show, with Zoyka’s desperate “models” garbed in Rick Frederick’s gorgeous flapper costumes. In becoming what it supposedly mocks, this show leaves the audience neither wiser nor even entertained. (Hugh Iglarsh)