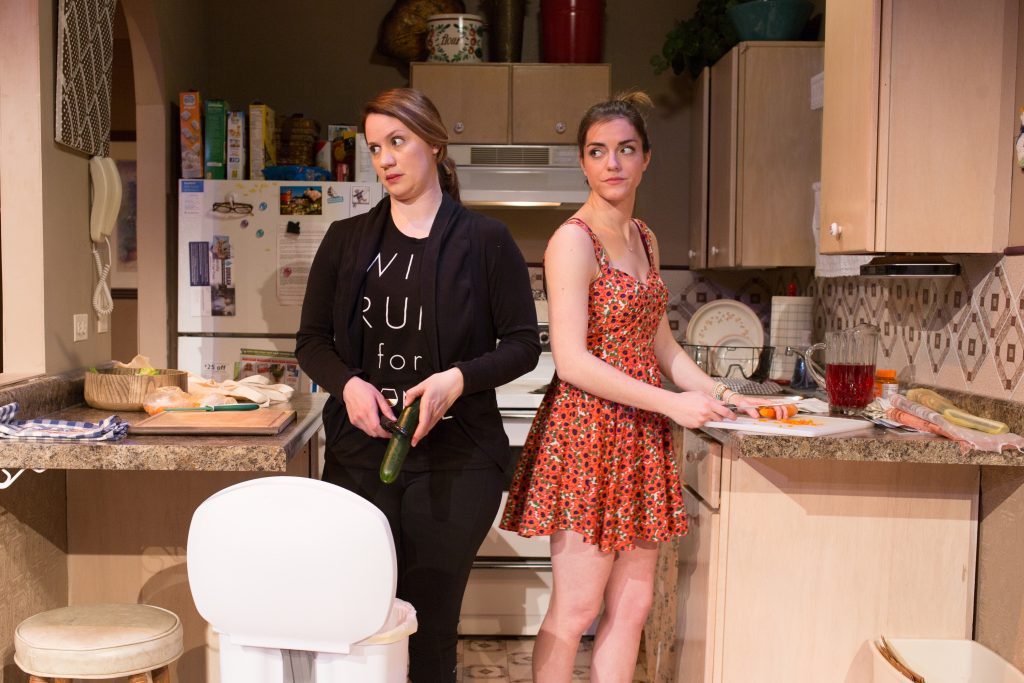 Early on in “Rolling,” jilted journalist Valerie digs at Sarah Koenig, beloved creator of “Serial.” While at first it seems like a put-on, as we spend more time with Val the jab begins to make sense. Through “Serial,” Koenig invited her own persona into her profession, a pursuit better known for objectivity and selflessness than celebrity. It’s not difficult to imagine her meteoric rise to populist notoriety being a source of frustration for legions of in-the-trenches journalists. Yet by the end of the play, Val has rescinded her earlier critiques of Koenig. This inexplicable change of heart is a fine but frustrating illustration of the contradictions that defines this problematic play.

Playwright Calamity West’s fascination with the dark shadows of pop culture runs deep. While her take on figures as far-flung as Bob Dylan and, in the case of this play, Sabrina Erdely, the disgraced Rolling Stone reporter and author of “A Rape on Campus,” are illuminating, West has a certain tendency to side with her protagonists early. In the case of “Rolling,” the acerbic Valerie (Dana Black) gives us plenty to dislike. So does the rest of West’s milieu, albeit for much different reasons.

Val’s sister (Abby Pierce) initially comes off helpless before later transforming into a vindictive narcissist. Meanwhile, their mother (Ann James) suffers from a stubborn lack of logic, adamantly refusing to acknowledge the difference between a friend and a literary agent. Rounding things out is Pat Whalen’s underachieving English professor whose fantasies of journalistic glory are limited by his ability to accept criticism. While Danny gets in the best burn of the night (at the expense of Val’s pride, no less), he is still stuck between a pathetic need for sympathy and ingrained misogyny.

While director Nate Silver puts his actors to good though occasionally limited use, the evening’s focus on the writer as beleaguered anti-hero tends to shift the focus back toward the playwright.

West writes like the room is on fire. Her prose is urgent but occasionally distracted by the forces of nature with which she is attempting to contend. Still, if you are interested in a theatrical work in progress by a writer who’s developing a unique and, with some additional experience, potentially authoritative voice, then I can think of no better example than “Rolling.” (Kevin Greene)