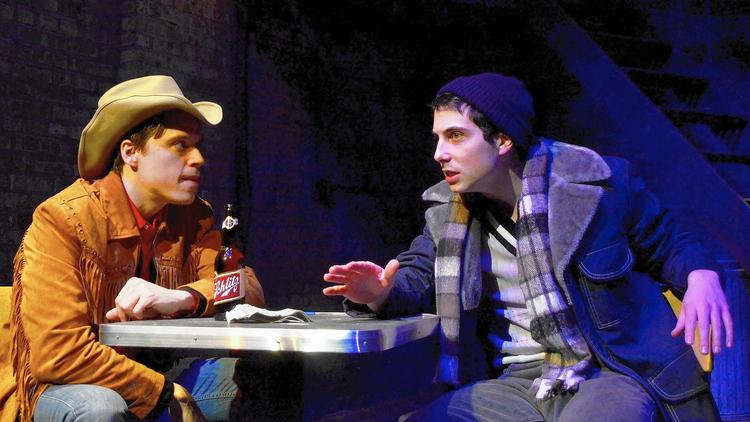 Before you ask: no, this is not an adaptation of “Midnight Cowboy” the film. It’s an adaptation of the 1965 book on which the film was based. Still, any adaptation would be incapable of entirely escaping the movie’s iconic shadow. Dustin Hoffman’s “I’m walking here!” is like an internet meme that arrived twenty years too early.

And yet the parts of this production from adaptor Chris Hainsworth and director Christopher M. Walsh that can be compared directly to the movie hold up pretty well. Adam Marcantoni brings a sparking, exposed-wire intensity to Ratso Rizzo that—after a brief adjustment period—is immensely watchable. Zach Livingston is less successful as the titular cowboy Joe but he does have the right giddy-up vulnerability for the role. These two performances don’t equal those from the film, but they are in no way dwarfed by them either.

However, everywhere else the show starts to falter. For instance, the script constantly returns to the phrase “there are no beatitudes for the lonely” in a way that suggests that the play itself is a beatitude, but almost none of the side characters that Hainsworth seems so excited to include add any additional verses to its plaintive prayer. Most of them are loud, obnoxious caricatures; they speak excitedly in tongues.

Hainsworth’s fluid script repeatedly jumps back and forth through time and space—something the production never gets a handle on. Where it should melt and dissolve from one scene to another, it instead stops, jerks and shudders back to life. Likewise, the ethereally modern sound design does nothing to ground the play in its sixties-era setting. The play feints toward live guitar accompaniment early on but doesn’t follow through. The production’s evocation of New York feels too “West Side Story” for a tale of such desperation and grit.

Maybe it’s fitting then that the best thing in this play is a Chicagoan: a prospective john named Towny who actor Patrick Blashill brings to life in Cinemascope, Technicolor and Surround Sound. Towny could easily have been an uncomfortable, outdated portrayal of a self-loathing, mother-clutching gay man, but instead he is an entire beatitude for the lonely unto himself. If Hainsworth were to follow Towny home and write him his own spinoff, you could count me in. (Alex Huntsberger)