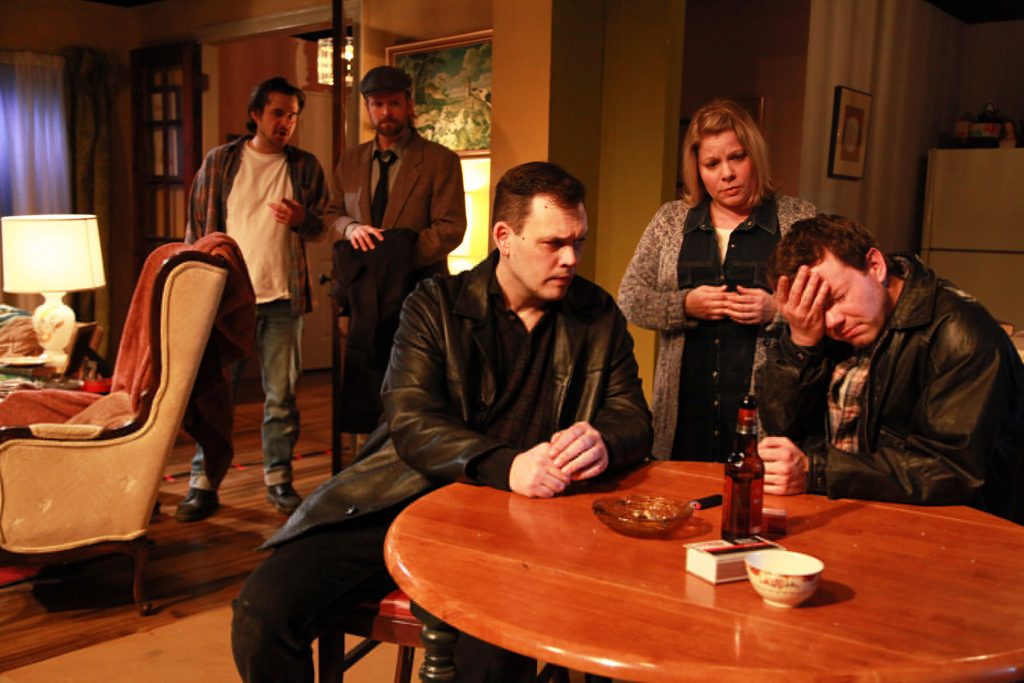 As an allegory for sectarian disputes of all kinds, “In A Little World of Our Own,” the breakout work from Northern Irish playwright Gary Mitchell, is easy enough to grasp without a background in the Nationalist-Loyalist conflict that raged in Northern Ireland for thirty years before being reduced to a simmer just at the turn of the millennium. While Mitchell’s play telegraphs this contextual history well, it is more concerned with capturing the changing of the guard, the shift away from violence that many, though evidently not all, were hoping for.

Mitchell’s play concerns itself with moral relativism. Early on, Ray—played by Matthew Isler, a dead ringer for a young Colin Farrell and this play’s strongest individual component—explains to Walter (Robert Kauzlaric), a kind of mediator between the Loyalist family this play focuses on and the unseen forces of the Irish Republic, that by kicking the asses of a couple of young hoodlums he has in turn saved them from a life of crime and, by extension, real punishment.

While not everyone buys Ray’s logic, it has a certain Old Testament ring to it that appeals to his younger brother Richard (Gage Wallace), who, despite being mildly mentally ill, fits perfectly into the often crass but fiercely loyal dynamic of this family. Toss in a third brother (Jeff Duhigg) who is attempting to go straight through the acquisitions of a wife (Jodi Kingsley), a house and an unshakeable conviction in God (in that order), some not-unforeseen violence, an ever-present bottle of whiskey and you have yourself a quintessential Irish play.

Landing squarely between tragic fatalism and the callous spirit of a careless universe, “In a Little World of Our Own” is wanting for drive. There are just too many points at which the action of the play should and very easily could have ceased. Strong performances notwithstanding, a cluttered set gets in the way of potentially dramatic moments including the climactic finale. The mystery here feels more like mere confusion and Mitchell plays his hand well before we have decided whether we actually care about these card sharks and thugs or their potential for redemption. (Kevin Greene)

Irish Theatre of Chicago at The Den Theatre, 1333 North Milwaukee, irishtheatreofchicago.org, $21-$30. Through April 10.