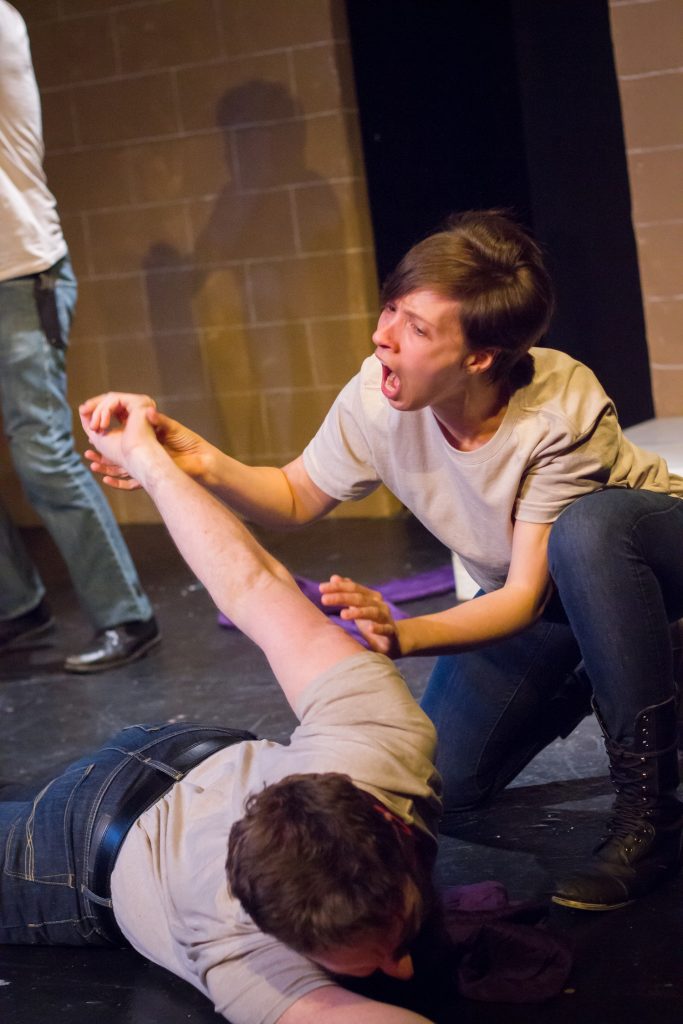 One test of a chic woman’s mettle is how many ways she can deploy her scarf: casually slung over a shoulder, knotted loosely or tightly around the neck, folded, fanned or flounced. This is the premise behind the two-toned scarf that serves as the variable within an otherwise anonymous, androgynous uniform of nude-colored t-shirts, jeans and dagger holster in Brown Paper Box Co.’s “Julius Caesar.” It’s a sash, a cravat, an ascot, a shawl, a cummerbund, a bustle, a back brace, a baby sling, a hood, a hijab. Royal purple on one side, vermilion on the other: this is a statement piece that will allow its wearer to convey an opinion on statecraft and bloodshed without saying a word. Suitable for both men and women, particularly in director Lavina Jadhwani’s production, which purports to retell a story largely about men and their voracity for power through “a gender-conscious lens” by swapping sexes for Caesar, Mark Antony and Calpurnia, the scarf is a device as random as the gender-bending—potentially clever but ultimately without purpose when unevenly applied.

The play unfolds on a spare set largely constructed of painted plywood that stands in for the marble and stucco of Rome. Great theater is not dependent on spectacle, however this production falters not through the heart of its players but in the insurmountable ungainliness of their execution: in fights that are neither believable nor deliberately mimed; in the actors’ propensity to stand stock still unless speaking; and in the almost universal misconception of volume for passion in a space of such dimensions where a normal speaking voice would carry well beyond the door.

Shakespeare’s “Julius Caesar” meditates on the nature and import of the sign, whether there is truth in the stars, prophecies, apparitions or hallucinations, words written in a will or uttered by a politician, the shapes of vessels that intimate spirit, claims to love and loyalty, gestures of courage or cowardice. “Yet see you but our hands/And this the bleeding business they have done:/Our hearts you see not,” says Brutus. Beneath is only the veracity of mortality—and Jadhwani’s best choice is to end the play with Mark Antony (Vahishta Vafadari) kneeling over the body of the disemboweled Brutus (Jeff Kurysz) uttering the line, “This was a man.” (Irene Hsiao)