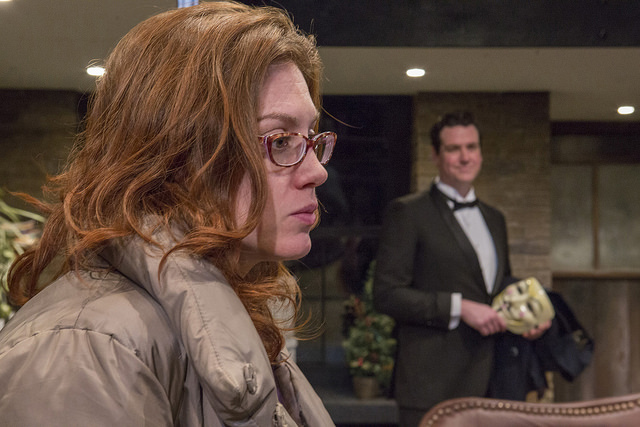 Like every television show ever made about life in New York City, Alena Smith’s “The New Sincerity” occurs in an improbably excellent piece of real estate: a split-level loft apartment with windows overlooking Zuccotti Park, furnished with kitchenette, vintage leather couch, communal dining area and shared work space with ample natural light. It rapidly unfolds that the joint is bankrolled by the father of the absent co-editor of Asymptote, a literary magazine with aspirations to become the next Partisan Review. The time is autumn of 2011, the occasion the heady heyday and decline of Occupy, the movement/protest/lifestyle that briefly became the object of the utopianism, skepticism and confusion felt for and by the millennial generation.

The drama of the movement, without the squalor of actually having to camp in the park, is enacted in the safe confines of the apartment, where Asymptote editor Benjamin (Drew Shirley)—who is not the main character but, as the white man with power, might as well be—is torn between his desire for rising political writer Rose (Maura Kidwell), his neoconservative fiancée Sadie, a Fulbright scholar who has just completed a book on the failure of the Left, and young intern Natasha (Erin Long), a chirpy, lissome product of internet culture who emits commentary at tweet-speed and effortlessly inhabits the frenetic gymnastics of real and virtual life.

The real protagonist, à la “The Devil Wears Prada,” is, of course, the introspective, secretly beautiful Rose, a graduate student writing her dissertation on romantic irony in Stendhal. Rose sublimates her sentiments about Occupy into her own amorous yearnings which alternate between sex in a tent with a shirtless-but-not-shoeless artist, occupier and espouser of free love named Django (Alex Stein) and repressed desires for her boss whom she hopes will leave Sadie and legitimately articulate a respectful and genuinely felt love for her.

Smart, well-acted and slickly produced, with a soundtrack that includes CeeLo Green and Rihanna, “The New Sincerity” captures the spirit of an age lightly lived and easily forgotten, which strives for a significance and a magnitude that won’t be easily achieved. (Irene Hsiao)