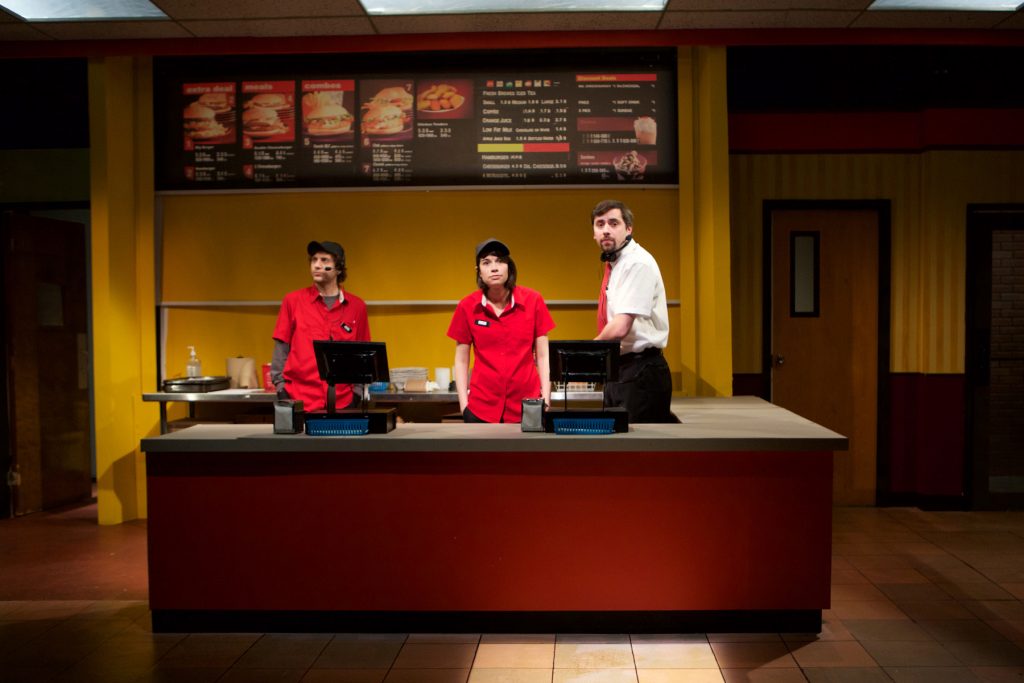 A grease of misery pervades the fast-food industry—the ceaseless cycle of uniformly geometric machine-molded meat simulants over the grill in a world where parallelepiped potatoes are the only vegetation and the anticipated sympathy of the outside world manifests as a shrill drone of unreasonable demands. The only reward for superior performance is the satisfaction of internally proposed metrics of no inherent importance: the fastness of fast food, as it were. Sideshow Theatre Company’s premiere of David Jacobi’s “Mai Dang Lao” (Chinese for “McDonald’s,” if you didn’t know) encapsulates the latent and undisguised frustration of such a world, offering an artificially enhanced (and therefore harshly accurate) taste of everything but the nauseating stench of the deep fryer in a brisk eighty minutes that combines the claustrophobia of “Huis Clos” with the desperation of “Clockwatchers.”

Every corporation envisions itself as a self-perpetuating ecosystem, only disturbed by the irritating stipulation of consumer demand and the occasional invasion of a dissident element. In a nameless McDonald’s in Suffolk County, New York, this bad seed is young Sophie (Sarah Price), whose slack-jawed gum-chewing and perpetual slouch is belied by the staunch glitter of her eyes and her determination to leave fast food in favor of studying veterinary medicine.

Those who would defeat her are her pre-middle-age-post-lost-ambition boss Roy (Matt Fletcher), spitefully damaged manager Kara (LaNisa Renee Frederick) and frantically ruthless bootlicker/assistant manager trainee Nancy (Tyler Meredith). Along for the ride is the lackadaisical stoner, Mike (Andrew Goetten). “The Happy Meal is a special premium item for paying customers only. It is not yours to give to yourself,” Kara sneers at Sophie when she grasps at one moment of fleeting joy, which consists of an outdated Mulan figurine and a cold ketchup sandwich that are both snatched away before the carb high can kick in. Hell really is other people.

The conflict comes to a head when a caller claiming to be the police telephones to accuse Sophie of shortchanging customers, resulting in a vicious interrogation that brings out the Cotton Mather in everyone. The ending, however, is not Arthur Miller but John Milton—enacted with astonishing authenticity of place and person by every member of the cast. (Irene Hsiao)