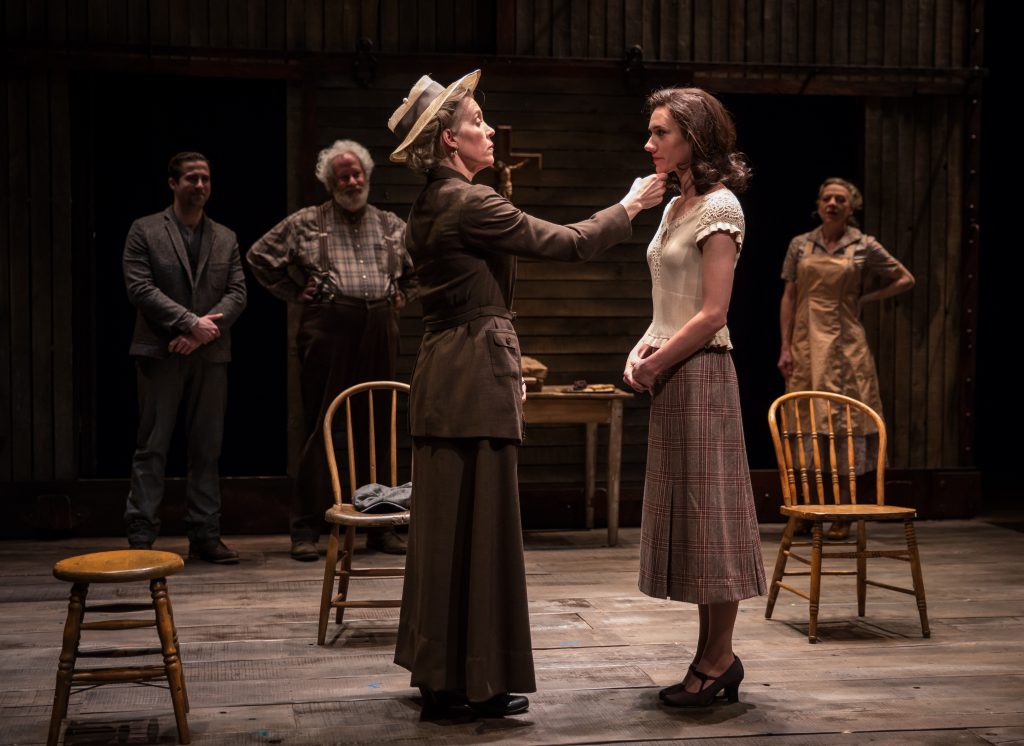 Under Lookingglass’ auspices, the hot-blooded and poetically infused romanticism of Federico Garcia Lorca’s “Blood Wedding” is transposed onto the American Dust Bowl. With its bountiful folk melodies and rustic milieu, this version channels Steinbeck though its origins are deeply rooted in a mystical and perhaps impossible past.

As a designer turned director, Daniel Ostling knows how to create a striking image, whether it’s a formidable, fortress-like wall stretching from floor to ceiling, an upright piano being hoisted skyward or a spinning wheel with red yarn against a blindingly white silk canvas. The text offers plenty of symbols to play with and the production is selective and serious about what it takes up and what it passes over.

However, the general excess of this production feels mismatched to Garcia Lorca’s simple story of longing. Ostling’s big ideas can get in the way of the text’s more elementary pictures. Smaller touches, like TJ Gerckens’ lights reflecting off small pools of water, express a more complete union with the spirit of the play than Ostling’s more elaborate constructions.

Even at its most poetic, “Blood Wedding” is archetypal by nature. There are plenty among this ensemble who understand their character’s truth to their bones, most especially Christine Mary Dunford who is as lean and prickly as a cactus in high summer. Other fine performances include Melisa Pereyra’s vengeful moon, Troy West’s booming patriarch and Eva Barr’s much needed but ultimately insufficient voice of reason. Each of their characters is obsessed with a single idea and gives voice to it in endless variations like an infinite Bach cantata.

There is imbalance in the ménage à trois of Kareem Bandealy, Chance Bone and Helen Sadler that will likely work itself out as the production tightens over time but which was nevertheless unconvincing as of opening. It is easy to get lost in the expansive expressiveness of Garcia Lorca’s writing. Yet his poetry is an expression of the soul not of the mind. These three need to feel more than we believe is possible in order to successfully carry off the tragedy of their fate. (Kevin Greene)