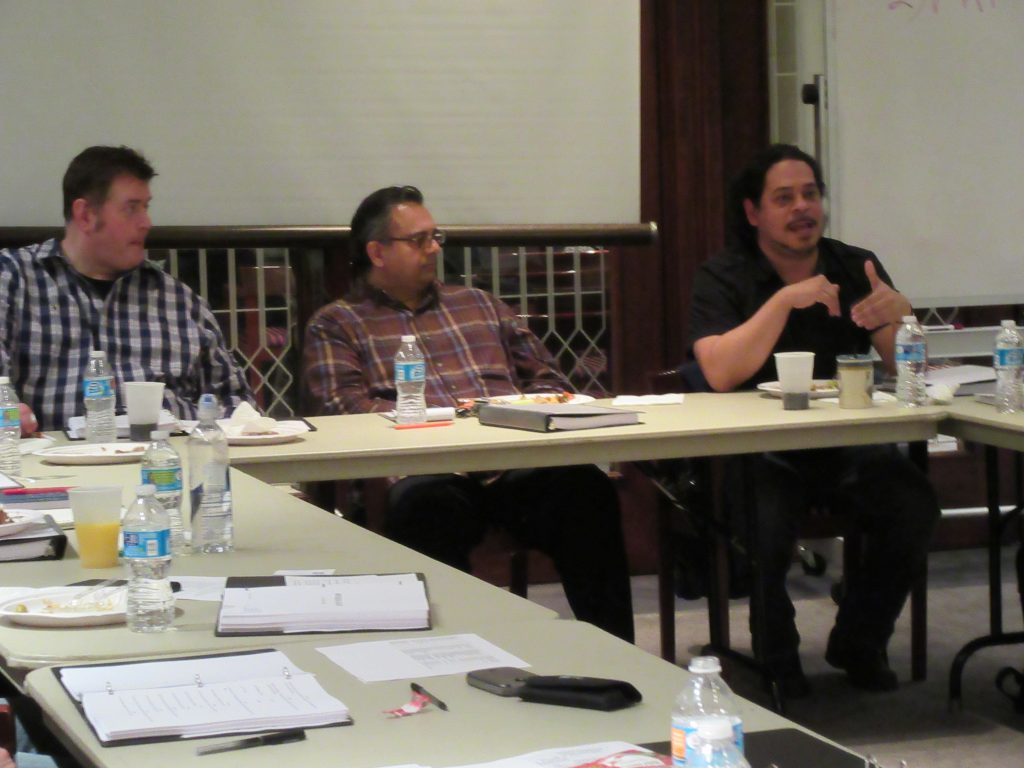 “There’s an interesting conversation taking place between the second floor and the basement,” Jamil Khoury says, as Silk Road Rising’s founding artistic director discusses the suburb-set “Mosque Alert” premiering March 24 at the historic Chicago Temple theater. Wedged between his play’s rehearsal and the polycultural lower-level theater was Dr. Larycia Hawkins, of Wheaton College controversy notoriety, who recently found herself at odds with her employer after her “embodied solidarity” with Muslims in late 2015. More alike than unalike, Dr. Hawkins’ hijab and the Al-Andalus Library and Community Center, a fictional centerpiece of Khoury’s newest play, are both embodiments of the clashes that result when physical representations of faith are met with suspicion, opposition and betrayal in suburban America.

“Mosque Alert” is based on five years of comprehensive research and script writing with more than 25,000 co-creators and 2,500 individuals who attended in-person events. The result: a play where race politics, xenophobia, whiteness, Islamophobia, sexuality, Muslim identity and the shift toward a more diverse American spiritual landscape all have an equal place at the Naperville dinner table.

One play, two video essays, twenty-four video blogs, nine online conflict scenes, a compilation video, dozens of live screenings at universities, civic organizations and houses of worship, as well as surveys and hundreds of online conversations leave sizable online and in-person community fingerprints all over the play’s characters and plot line; the idea being to have a community conflict that represents the actual feelings of those communities.

“The idea was if we are going to reflect a moment in our history then the reflection should really be a mirror, as it should be of the people around us not a single artist’s vision,” says Malik Gillani, executive director of Silk Road Rising, on the collaborative process in finalizing the script.

Gillani believes the unique contribution of Silk Road was foregoing a traditional playwriting process, instead developing the play on a massively collaborative and public scale where Gillani and Khoury neither judged nor censored feedback from audiences.

“One of the things that we modeled was, you have to be able to hear people and you have to create spaces where people can talk. Not everyone feels safe being bigoted in a public space but I think people have said things like ‘I’m worried’ or ‘I’m confused’ or ‘I don’t get it.’ What we have created for them is that it’s okay to feel like that and the work of art is a way to engage that topic,” says Gillani of taking in the good, the bad and the ugly over the five-year process.

Khoury’s residencies at Illinois’ Knox College and Indiana’s Valparaiso University also contributed to the play’s final shape. Now, three families and an uncle behind the Islamophobic “mosquealert.com” make up eleven complex individuals of white, Egyptian and Syrian backgrounds all at home in Naperville.

The initial inspiration for the play came from the controversy surrounding Park51, originally named Cordoba House, a thirteen-story proposed Islamic community center in Lower Manhattan which gained the derisive label, “Ground Zero Mosque.” Designed by Beirut-born Michel Abboud, principal of SOMA, Park51 was to be a contemporary and natural yet Islamic design in lower Manhattan serving not just as a mosque but a community center and remembrance of lives lost on September 11.

For Khoury and Gillani, watching an Islamic community center move so quickly to “an ugly place” of partisan bickering and punditry pushed them to connect the dots of Islamophobia and resistance to Islamic centers in suburban Chicago where similar cases emerged. Both say inspiration comes from what they see as the deep, complex conflicts not often covered in mainstream media.

“Oftentimes from our research we see these conflicts start out in this sort of stealth language—‘I’m worried about traffic’ or ‘I’m worried about parking’  or ‘noise’—and then literally within minutes it’s Osama Bin Laden and honor killings, female genital mutilation, Sharia law and this fear overpowers people. These very above-the-board appeals to Islamophobia and encouragement of ‘Let’s battle Muslims,’ ‘Let’s seal the borders,’ ‘Syrians are bad,’ et cetera which we see now resonating on a large scale in the U.S. The incentive and goal of this play,” says Khoury, “is to engage with these large fears through the lens of mosque cases because a mosque becomes something physical and present in a community.”