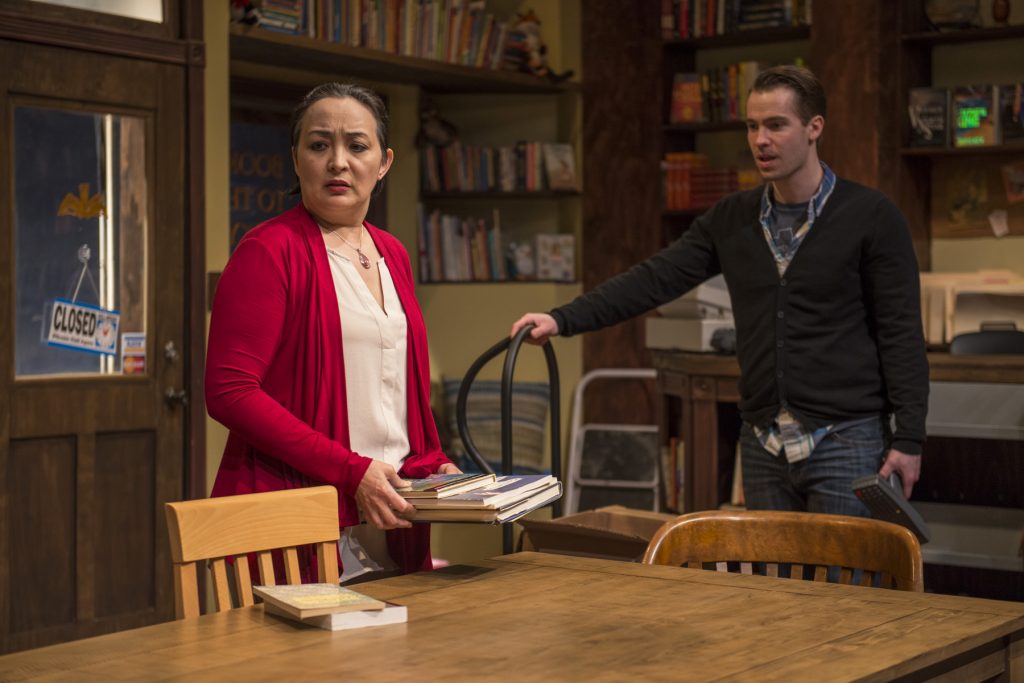 Like a car attempting to start in deep winter, A. Rey Pamatmat’s “after all the terrible things I do” stutters and shakes with internal conflict. Gears grind but never fully catch. When the engine of this relentless play fails to start,  it starts the process all over again shortly thereafter. After a while it is hard to tell whether Pamatmat is motivated by spite or faith. Either way his play never manages to leave the garage.

Pamatmat’s play is defined by its braininess, which tends to turn inward rather than project out. A recent college grad and a potentially talented writer, Daniel (Colin Sphar) has just returned home and is determined to work for Linda (Lisa Tejero) at the bookstore where he spent much of his early childhood. This idyllic vision of innocence is shattered through a series of repetitious encounters between the two as Daniel introduces Linda to a complex portrait of gay masculinity. She in turn alternates between maternal instinct and self-preservation.

Like so many young writers, Daniel is obsessed with being discovered using his own life as a foundation for his “first real novel.” As we follow him down the rabbit hole of his hang-ups, we are constantly pulled back by Linda’s contradictions. Like Daniel, she is a bully. She sympathizes with bullies—and by extension herself—but still bears a great deal of guilt and resentment. She is furious with Daniel for using her son’s life as creative fodder yet she offers this information up freely as if in a vain attempt at absolution.

The element of diversity here is complicated though not in a particularly thoughtful way. Linda’s Filipina identity has little impact on the story beyond vaguely accounting for her ignorance of what gayness looks like. Yet Linda is ignorant in the same way most of us are at one point or another, which has very little to do with where we come from.

On the whole, Pamatmat’s explanations for his characters’ behavior are either buried deep within minuscule detail or not present at all, which might as well be the same thing. The play concludes by offering a heartfelt but empty resolution to Daniel and Linda’s mutual grievances. Despite all the words they exchange, neither seems to have learned much of anything about the other. (Kevin Greene)