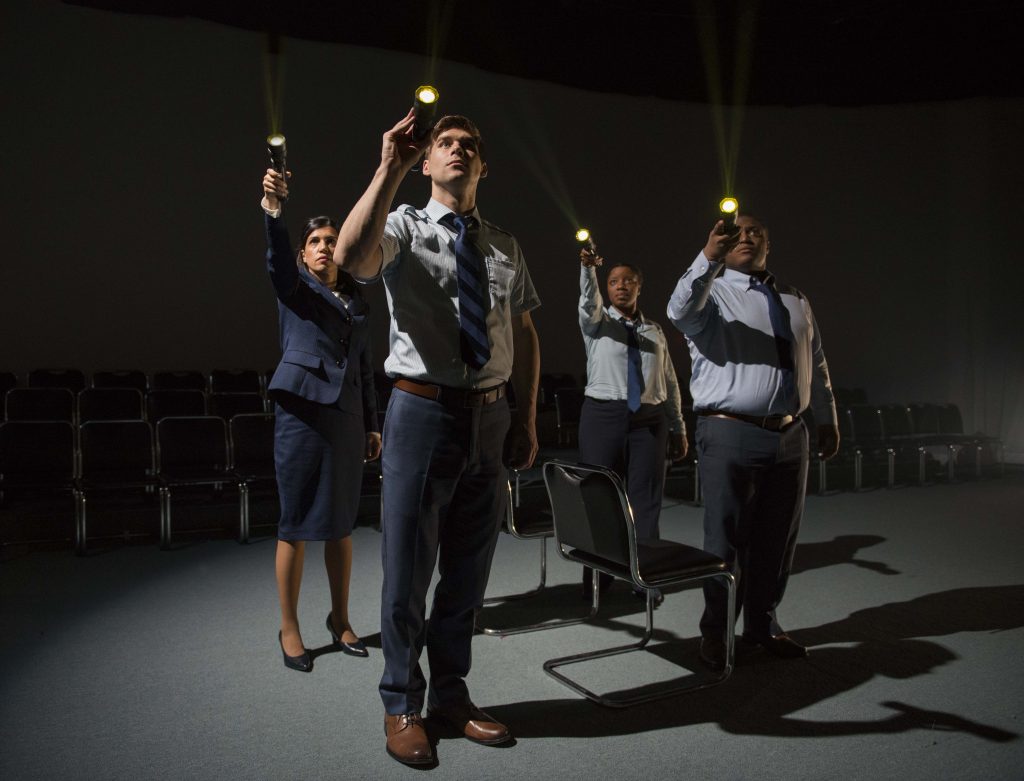 I wasn’t always afraid of flying. It happened somewhere in my late teens or early twenties. All of a sudden, a trip to the airport was accompanied by an intense sensation of dread. To explain it, I would half-jokingly blame my phobia on “United 93,” the Paul Greengrass movie about the September 11 hijackings, which ends with a horrifying view from the cockpit as the titular plane hurtles toward the earth. Needless to say, I don’t watch airplane-centered movies anymore. So when I heard that The House Theatre was going to do a show about a plane crash, I knew I was going to steel myself. What I didn’t know was just how understated and graceful that production would be or how it would fill me not with dread but with hope.

A docudrama ensemble piece in the spirit of Timeline’s “Spill,” “United Flight 232” is a world-premiere adaptation of Laurence Gonzales’ book of the same name helmed by Vanessa Stalling. The production is minimalist by House Theatre’s standards: a white curtain drawn around the circumference of the stage, a collective of durable chairs, few props and even fewer tricks. While “The Last Defender” whirred and beeped in the basement, the audience upstairs was treated to a very different kind of adventure, one defined by the contemplation of life and death.

Yet “United Flight 232” isn’t as heavy as it sounds. Its pursuit of the thread that runs through the lives of complete strangers puts it in communion with the spirit of this company. Also, some stuff falls from the ceiling. It just wouldn’t be a House show otherwise. There is an understated quality to Stalling’s direction that encompasses the entire production from the action of the ensemble to Steve Labedz meticulous score.

In the show’s final scenes, Labedz’s soundtrack became enhanced by the sounds of sniffling noses, which added a kind of unaccounted for aesthetic realism. If it is House Theatre’s mission to create engrossing, believable worlds, the active pursuit of tissues is evidence of their success here. Bon voyage, dear friends, and take care. (Kevin Greene)