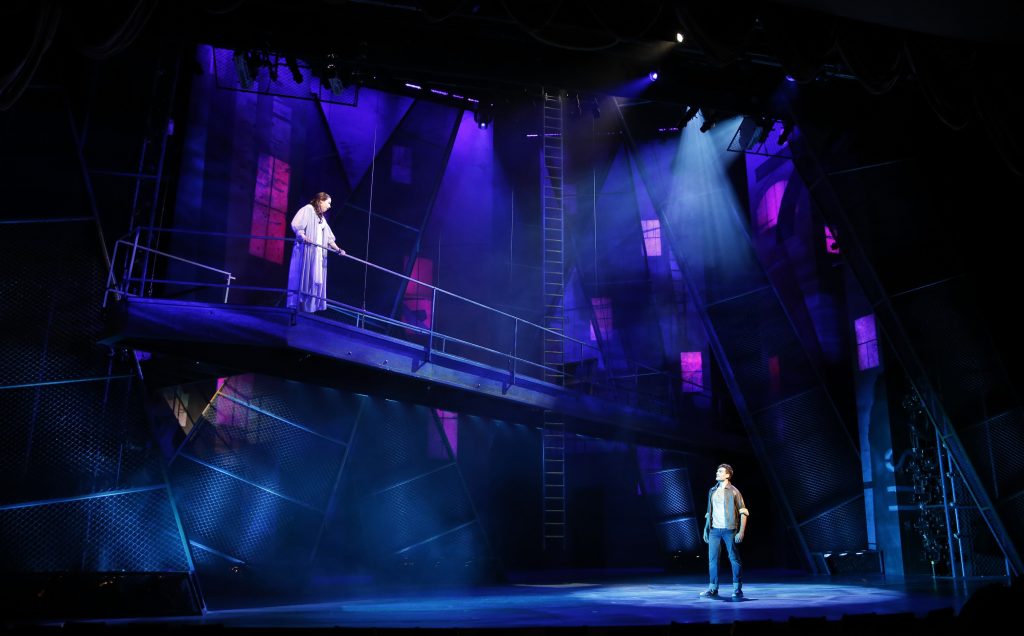 Credit the Republican Party, with their nativist platform and wall-building speeches, for making this very dark and violent “West Side Story” so relevant to 2016. Often cast in stark tones of black and white (with even the dresses somewhat muted), the gangs here dance around each other with complete and utter hatred. Bearing witness to this are a few wise but powerless grownups and the police with their casual brutality. This cycle of hate is never more clear than when Maria points the gun at her cast members before aiming it, for what seems like eternity, at the audience. In that moment, forgiveness seems impossible.

Director Jim Corti realizes his dark vision by effortlessly weaving all the elements together. The full orchestra punctuates the choreography, which allows the actors to perform at their optimal best. Stage setting is more minimal than in previous Paramount Theatre productions but what exists on stage is put to good use as the actors can often be found literally climbing to great heights. Nothing on stage is wasted and everything feels natural and unforced.

This is especially true in regards to Zoe Nadal whose big, soulful voice is paired wonderfully with a complete vision of innocence. Her Maria not only resists wearing white to the dance but also grows immensely in the second act. Her star-crossed lover, Tony (Will Skrip), is both likable and quite capable of great love as well as rage. Alexander Aguilar is also convincing as a proud young man willing to stand his ground against the not so subtle racism of the Upper West Side. Yet the most impressive performance may belong to Mary Antonini as Anita, whose presence on stage is undeniable.

This is a very physical production with a lot to say not only about racism but also about the effect America has on new immigrants. Early on it is clear that the Sharks not only fight with Jets but also with themselves as they sort out exactly what the new rules allow. In the end, the price for overestimating one’s freedom to live and to love can be very tragic indeed. (Noel Schecter)