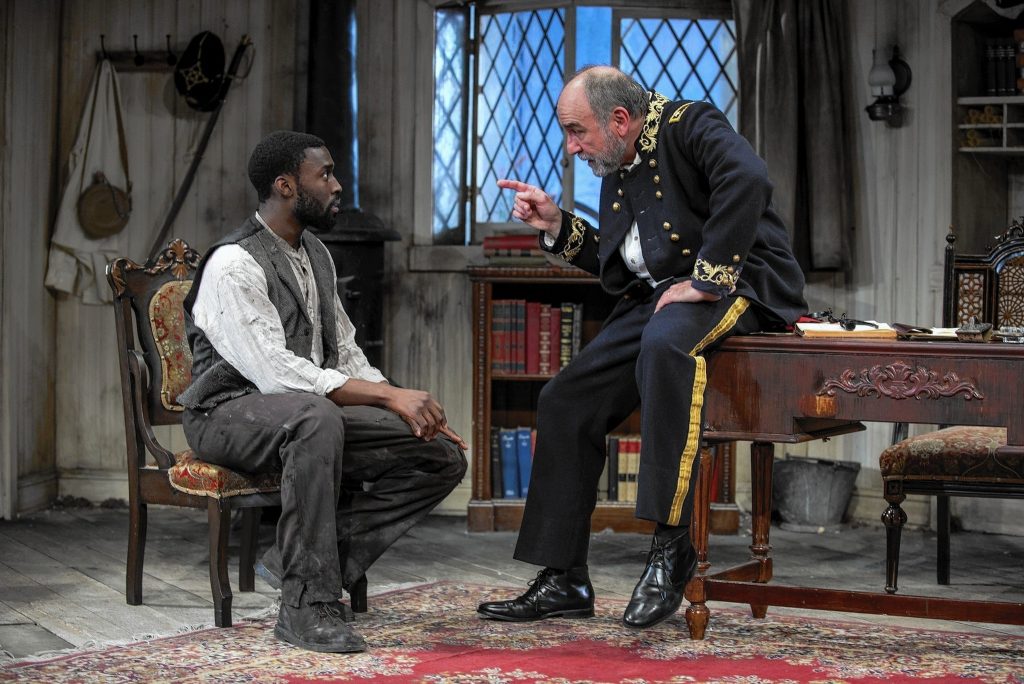 Union General Benjamin Butler probably never realized that war could get so personal. Just weeks into the Civil War, he faced an unusual battle, an invasion of his intellectual, emotional and physical space by a runaway slave. How he resolved this personal battle constitutes the core conceit of “Butler,” a play based on real events that shaped the treatment of former slaves in the Union military.

Blazingly brazen, amazingly well spoken and informed, the slave Shepard Mallory (Tosin Morohunfola) demands that Major General Butler (Greg Vinkler) provide him sanctuary from his owner and a place in the Union army. He argues and debates, a fact that astounds, enrages and—deep down—charms the choleric general, who sees a lot of himself in Mallory. But Butler insists he can do nothing to help the wayward runaway; both the Constitution and the Fugitive Slave Act of 1850 require the return of fugitive slaves to their “owners.”

Such a return would mean almost certain death for Mallory. So what, if anything, can the general do to save Mallory’s life (and perhaps rescue his own career)? It soon becomes clear that Butler’s training as a lawyer may help provide a clever, almost painfully ironic solution.

But before that finale, we enjoy the spectacle of Butler and Mallory—and later Butler and his Confederate counterpart—firing playwright Richard Strand’s incendiary dialogue at one another. It often hits its target. As Butler, Vinkler acts touchingly confounded by this “war”; it’s as if his character is only now gingerly confronting the moral implications of his one-time support of Confederate leader Jefferson Davis as Democratic nominee for president. The battle also stokes a vague fear in Butler. As Mallory, the exuberant Morohunfola seeks to balance the power differential by repeatedly violating the bossy general’s personal space. The practice seems to be driving the plot toward a tragic moment until Vinkler discovers and reveals a better, braver Butler.