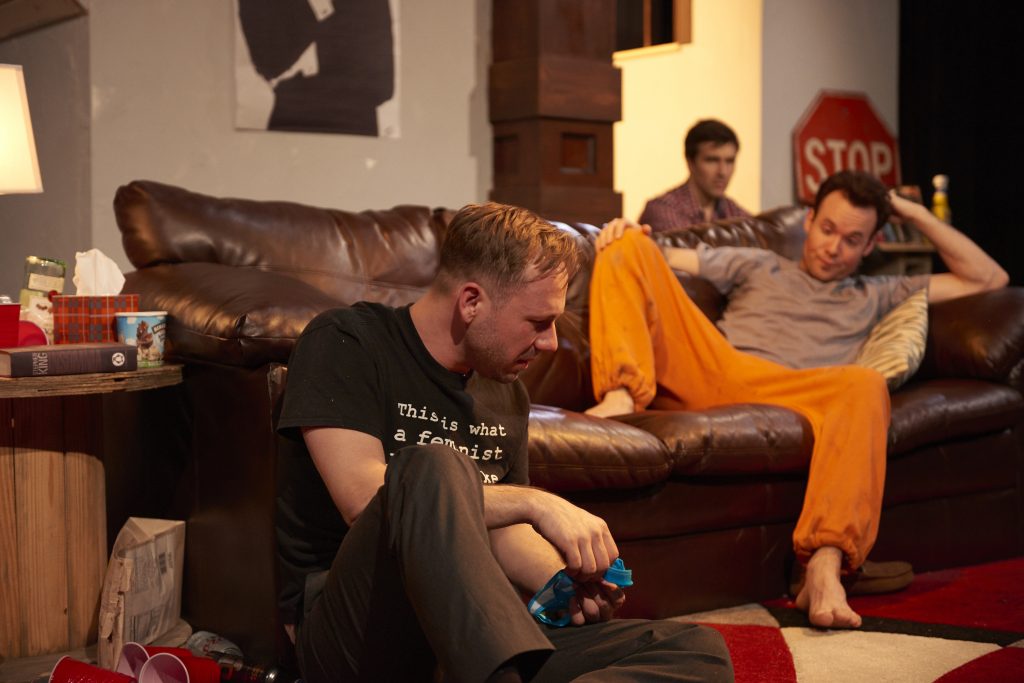 Some dramatic concepts are more suited for a therapist’s office than a theater. Such is the case with Caroline V. McGraw’s “The Bachelors, ” a one-act eruption of fear and loathing now on display upstairs at the Greenhouse Theater.

McGraw’s essay in gross-out pseudo-realism concerns three former frat boys, now in their thirties, who can’t let go of their party-hearty pasts. These poster boys of arrested development–Kevlar, a drugged-up moron; Laurie, a neurotic weakling; and Henry, a psychopathic rapist–room together, bound by a shared misogyny and Gen X self-pity.

Bad things happen, although not as bad as these repulsive characters deserve. We learn that all men are pigs but never find out why. The script vomits its bile, the actors degrade themselves in various attention-getting ways, and the audience soon feels the need for a long, hot, post-show shower.

The externals are fine–Grant Sabin’s grody set, with just the right patina of mildew, is complemented by Eric Backus’ tinny vintage rock score and Rachel K. Levy’s unobtrusive lighting–but the drama never happens. Much of the blame lies with McGraw’s inability to tell a story cleanly or create believable or engaging characters. Director Erica Weiss doesn’t help matters by staging the action as a series of amped-up set pieces–an odd one-man dance sequence, a fight, a painfully prolonged confessional–without buildup or flow. And while actors Nicholas Bailey, Shane Kenyon and Boyd Harris exhibit a flashy physicality, they do not share space well.

Maybe there’s a feminist message lurking here about the cultural forces that create self-absorbed, women-hating eternal adolescents. But those conditions are never described or analyzed, and the men’s bone-deep sexism goes unchallenged. Although written by a woman, the play comes off as a statement of patriarchal triumphalism with distinct fascist overtones.

What’s most disturbing about “The Bachelors,” which premiered last fall in New York, is that it captures the zeitgeist without critiquing it. The play’s cardboard-cutout characters, reeking of phallic narcissism and empty of compassion and conscience, are avatars of Trumpism, reveling in their swinishness. Like The Donald’s political stage-show, this is a comedy of cruelty–at bottom, of death–and I for one don’t find it funny at all. (Hugh Iglarsh)