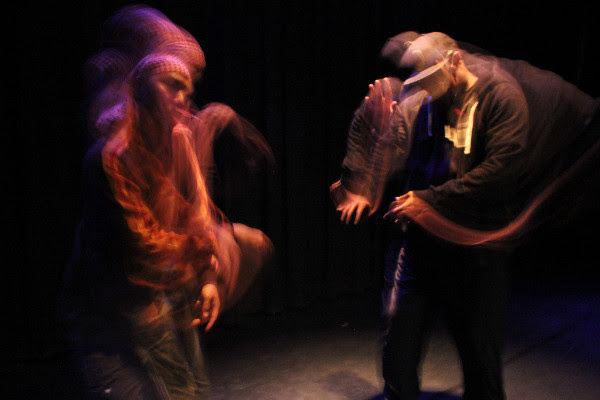 Butoh artist Michael Sakamoto and Rennie Harris, founder/artistic director of hip-hop performance group Rennie Harris Puremovement, merge dance forces into an entrancing, emotionally potent new physical language in “Flash,” a two-man, autobiographical show that plumbs the formation of cultural identity and the power of vulnerability. Michael Sakamoto spoke about the performance in a phone interview from his home in Ohio.

You’ve studied and written about the parallels between hip-hop and Butoh. Why are you attracted to similarities between these forms?
As a teenager, like a lot of Asian Americans in the late seventies and early eighties, I was falling in love with hip-hop. I was one of those kids who would pay full admission to see “Flashdance” five or six times just to see the minute and a half of Rock Steady Crew dancing in the street. In those days you had to find it where you could. I was never a serious street dancer but it was always in my body and my rhythm sensibility. When I came to Butoh in my mid-twenties I defaulted to the illusory, imagistic side of Butoh—creating a surface image with something else heavy, darker, absurd going on inside. And that’s very much what happens in popping. Rennie speaks about it in those terms. Popping isn’t an aggressive, masculine form necessarily; it’s about creating an interior world that you’re semi-presenting to an audience, but you’re hiding more than you’re putting on display. I find that resonates a lot with Butoh, which really embraces a sense of chaos, crisis and contradiction between your internal and external world, between your intuition and the socialized part of yourself.

And they came out of similar cultural conditions. In postwar Tokyo, that devastation, the cultural and social control and hegemony that came out of American occupation… in some ways artists creating work out of that environment were similar to street dancers that came out of New York in the late sixties to seventies, creating a forum from marginalization, from being told their lives were valueless. Both Butoh and hip-hop dance came out of conditions of oppression and are forms of resistance.

This is a very personal show and the emotional power of it can really sneak up on you.
It comes from our lived experience. Rennie and I were both born and raised—Rennie more than me—in dangerous neighborhoods. I’d say he’s been through more challenges and trauma in his early life, but I witnessed these things firsthand for the first fifteen years of my life. We’re feeding off of that energy and experience, at the same time being inspired in our youth, for me by African-American culture and, for him, by Asian-American culture. We have a theme in the show where it’s implied that as a kid I wanted to be black and dance like Jeffrey Daniels on Soul Train and he wanted to be Bruce Lee after going to the kung fu flicks. When Bruce Lee beats up Chuck Norris in “Way the Dragon” people of color all over the world were like, “Okay, yes. A non-white person can win.” And from the Asian-American perspective, 400 years of oppression experienced by African Americans creates a deep and powerful culture and expression. For us it’s always been inspiring to see an alternative culture in America expressing ability, power, a full range of emotions—expressing sadness, grief and trauma and, at the same time, expressing hope and joy. Asian Americans have a tendency to keep things in and operate on the down low. And yet as Americans we’re acculturated to speak our minds and claim our space. The way African-American culture has acted on that is really inspiring. The show is no one else’s experience but our own, but our hope is that it resonates with people in the audience whatever their background or experience.

Were there any surprises for you in the creation of this piece?
I didn’t realize how deep and vulnerable Rennie goes in on stage. He really opens up physically, emotionally, psychically, spiritually and there will be nights when I look at him and there’s this emotional human chasm that has opened up. It’s awe-inspiring and forces me to be more vulnerable, otherwise he’s going to wipe me off the stage. On our second touring gig he really found that connection and at first I didn’t feel I could match it so I had to really let loose the second night. He said the next day that he hadn’t had to push that hard since he was a young street dancer in Philadelphia. I’ll probably never feel a higher compliment from a colleague. The other thing I would say is how much the show means to me personally; it’s the show where I feel the most natural. It’s the most organic in terms of who I am, how I move, the way I feel, my attitude toward life, the way I like to relate to an audience. I feel fully embodied and fully myself in a way I haven’t in the past.

Anything else you’d like to add?
For me, it’s very much about creating a cultural dialogue that I feel is necessary right now. For instance, the cultural commons: what do we share within our differences? How do we improve our ability to speak with one another as societies, individuals, culture bearers, who are always going to have things to share and differences and disagreements? All the work I’m creating these days is trying to model the way to share with difference.