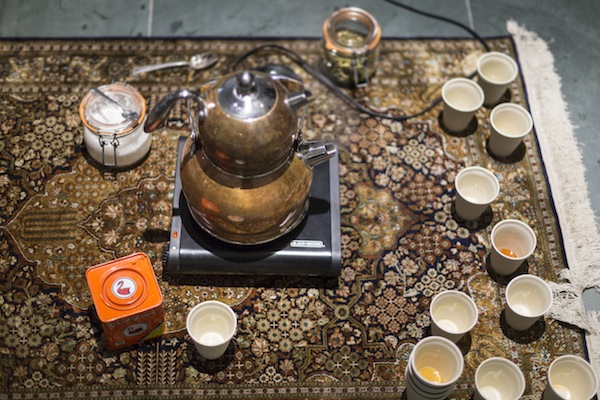 Taking place over three weekends at Links Hall,”The Tea Project” tackles questions of racism in American foreign and domestic policies that have not only opened the floodgates of demonization of Muslims, black and brown peoples and others of the most vulnerable among us, but has at times also led to their wholesale slaughter. Performed collaboratively by Iraq war veteran Aaron Hughes and Amber Ginsburg, a lecturer at the University of Chicago’s Department of Visual Art, the duo originally met through the OpenSource Art program while they were both living in Champaign-Urbana. The event is broken into three performance frameworks: Tea Performances, in which Hughes and visitors use the activity of drinking tea to open a space for difficult discussions on subjects like trauma, war and racism; cabaret Tea Engagement evenings, in which small tables are provided where visitors may sit and sip tea while listening to “narratives, music and new poetry works paired with a Poem from Guantanamo, guest speakers, legal activities, academic talks about detention, war, love.” Lastly, there’s the Tea Forum on Justice and Reparations, a day-long event to “explore the complexity of extralegal detention.” Much of the dialogue throughout the Tea Project singles out the systemic racism motivating the endless global War on Terror, but this component of the event brings it right home to Chicago—through the lens of the Burge Reparations movement’s ability to catalyze torture survivors, activists, artists and lawyers and bring them all together in the fight to win concessions for the victims of the infamous Chicago cop who used torture as an interrogation technique. Among the noted guests in attendance throughout the project are Marc Falkoff, a lawyer for many of the detainees at Guantanamo, and Chris Arendt, the former Guantanamo prison guard and subject of the Esquire profile that inspired the design for the 779 porcelain tea cups cast for the project, one for each prisoner, based on the drawings by the detainees on their Styrofoam cups. West Point graduate James Yee, the former Muslim chaplain for the prison camp in Guantanamo Bay, will also participate in the event. Yee, falsely accused in 2003 of spying, espionage and aiding the alleged Taliban and Al-Qaeda prisoners, was held for seventy-six days and subjected to the same solitary confinement and sensory deprivation techniques as the detainees in Guantanamo until his release, when all the charges against him were dropped outright. Not only is the Tea Project highly recommended, it’s an essential look inside the often broken machinery of our flawed American Democracy. (Michael Workman)