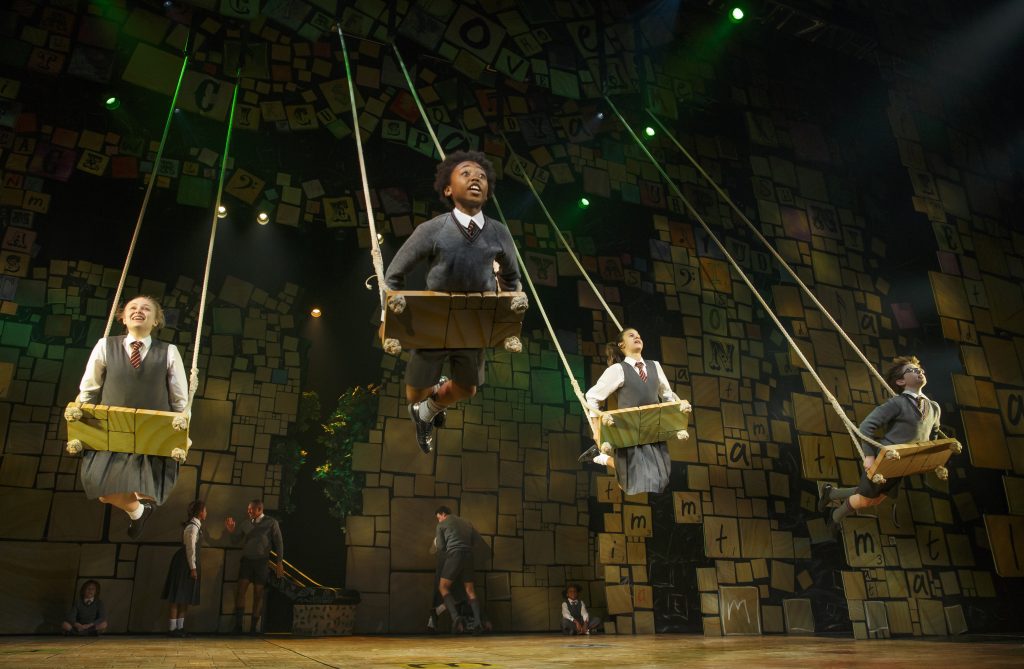 The company of “Matilda The Musical.”/Photo: Joan Marcus

Before seeing this production, I didn’t know much about “Matilda The Musical.” By the time I left the theater, it had become one of my favorite shows.

The cast is filled with incredible young performers. Nine-year-old Lily Brooks O’Briant stars as Matilda Wormwood, a five-year-old genius growing up in a household where her family couldn’t care less about her. She longs to go to school to get away from her home life. It’s at school where she meets kids who have grown up believing they are all “little miracles.” While their teacher, Miss Honey (Jennifer Blood), wants her classroom to be a place that inspires learning, the school’s headmistress, Miss Trunchbull (David Abeles), believes young people are “maggots” who need to be instructed with a firm hand.

Abeles, Blood and the other members of the adult cast are as delightful to watch as the kids. They very often portray child-like qualities themselves–getting into mischief, whining when they don’t get their way and being overly shy or intimidated in the presence of other adults.

The wonderful world of Roald Dahl (author of “Charlie and the Chocolate Factory” and “James and the Giant Peach,” among others) is brought to life with contrasting costumes that perfectly reflect the characters. Beautiful lighting enhances the storytelling while the set serves as a constant reminder that the audience is seeing this world through the eyes of a child. Alphabet blocks reminiscent of scrabble pieces frame the stage and similar pieces are cleverly used throughout the performance, especially in “School Song.”

Though the show is nearly three hours long, many children in the audience seemed to enjoy the story as much as the grown-ups. Witty and memorable songs, a clever book and an enchanting cast make “Matilda The Musical” a magical experience for audiences of all ages. (Mary Kroeck)