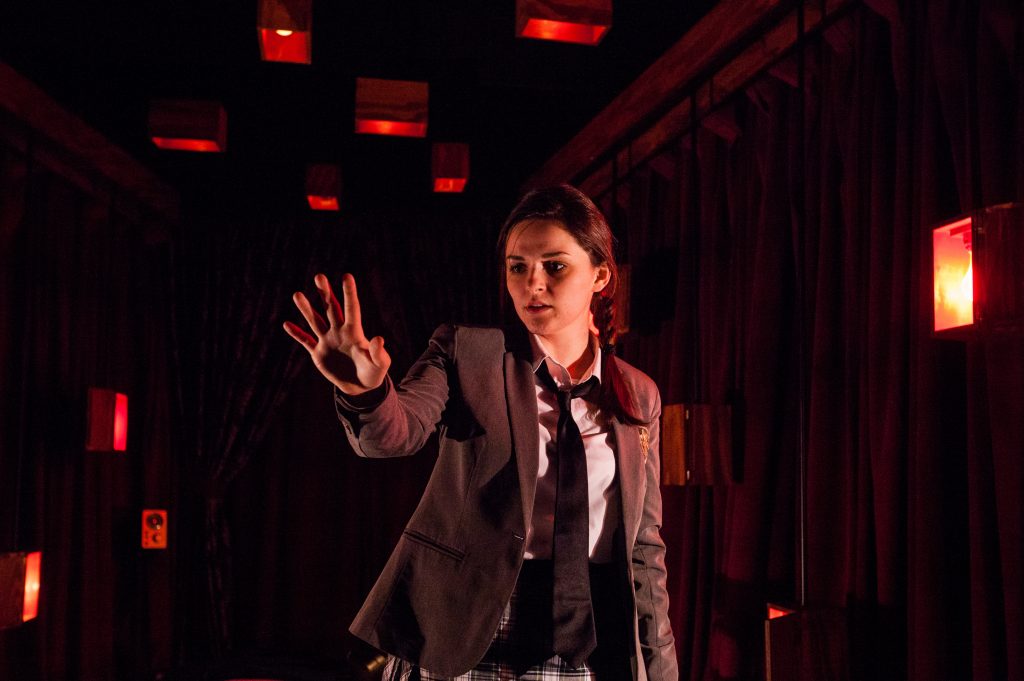 It begins at the entrance to TUTA Theatre. The front door is locked so you walk around to the back alley and into the garage with the light on. Once you step past the shelves, there are three rows of seats and black sheer steps. After a moment, a figure draped in a black overcoat will begin to tinker with a box along the wall. Then will sit down on the bench. The curtain does not raise as you might expect. And Bernadette will begin to speak.

Bernadette, embodied by Carolyn Molloy, hides behind the curtain, costume changes and forays into “The Maids,” even as these instances reveal her. Molloy’s creation is an act of amazing preparation, vulnerability and spontaneity. Her character work within Bernadette and the other figures she manifests is precise and personal. In a one-person show, this endurance and creativity sustains us. Her work is impeccable.

Adam Rapp’s script allows for the metatheatrical questioning of the role of an audience in the creation of art but director Jacqueline Stone plays it smart and never leans too heavily on it. Her direction is deft, stylish and intelligent, but she never draws attention to her choices. They’re made to reveal, tease and pull back the mask but never quite remove it from the face.

The body is a cage. The body is a prison and a protectorate, a warden and a sister. It defends you even as it obscures you from view. This is what “The Edge of Our Bodies” knows. When the curtain rises and somebody tries to reach us, we may hide further into our skin. (Jay Van Ort)