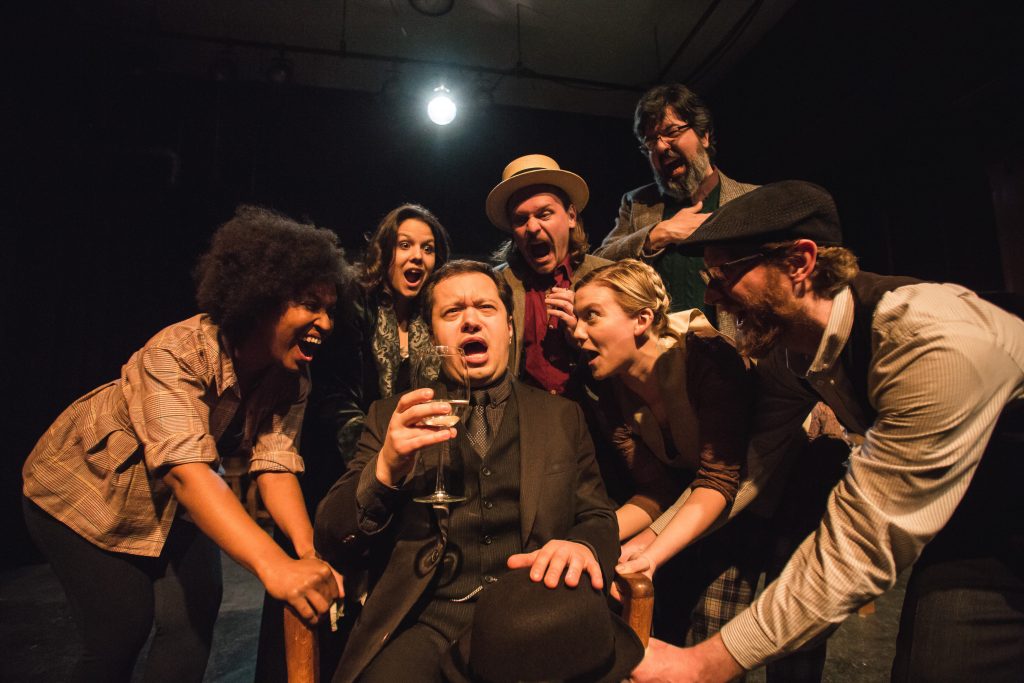 The cast of “Ulysses” at The Plagiarists/Photo: Joe Mazza at Brave Lux

This adaptation by Jessica Wright Buha and Aileen McGroddy (who also directs) begins as a lecture on James Joyce’s 1922 masterpiece with a professorial Christopher Donaldson setting the scene and the other performers introduced as his teaching assistants. It’s a plausible framing device for a challenging book. Unfortunately, the lecture format soon fades away, as does the play’s dramatic vigor, and this school project–complete with blackboard and syllabus–earns no more than an E for effort.

To be fair, it’s hard to imagine how this consummately novelistic work could be recast for the stage. It is at once too vast in ambition and too limited in actual incident, depicting as it does exactly one day in the life of nebbishy everyman Leopold Bloom as he roams the streets of Dublin. During his home-and-back odyssey he crosses paths with embittered poet Stephen Dedalus and thinks erotic thoughts about his wife Molly, who (as Leopold knows) is arranging an adulterous tryst for that afternoon with the rakish Blazes Boylan. Within these confines the author manages to explore universal themes of myth, religion, art, exile and sexuality.

Drowning in the book’s sea of riches, McGroddy and her callow cast deliver an overlong sequence of theatrical moments that fail to gel into a satisfying whole. The show is so void of shape, color and spark that one begins to wonder whether the dullness isn’t a deliberate attempt, in the style of the early modernists, to instigate audience outrage and bafflement. If so, the strategy works all too well.

The three leads–David Fink as the cuckolded Bloom, James Snyder as acerbically intellectual Dedalus and Ashley Fox as hot-to-trot Molly–are well cast physically but lack much voltage. Only Isaac Samuelson, who plays Boylan and a host of other characters, including the Blooms’ cat, has the vaudevillian gusto that the story needs.

Bloom’s dignity in the face of petty prejudice, Dedalus’ defense of art in a philistine world and Molly’s embodied earthiness amid hypocrisy remain as meaningful and moving today as when they were written. If this plodding production, which conveys just a hint of Joyce’s magic, inspires viewers to give the book a try, it will have accomplished something worthwhile. (Hugh Iglarsh)