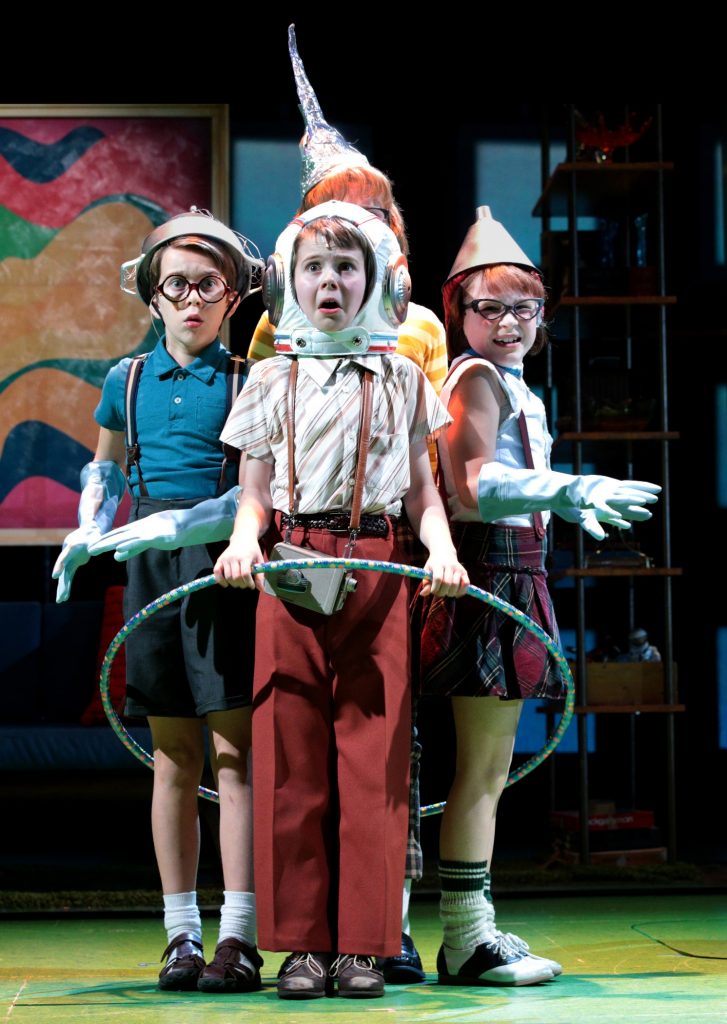 Hazel, that spunky maid with more heart than tact, was first introduced to the public as a single-panel cartoon in 1943. Immensely popular, the cartoon later became a sitcom starring Shirley Booth. The latest incarnation of Hazel, a world-premiere musical, opens Drury Lane’s 2016-17 season and is set in the mid-sixties. This “Hazel” focuses on the titular character’s entry into the Baxter household.

The Baxter’s need for a maid stems from Mrs. Baxter’s decision to enter the workforce. Mr. Baxter, in turn, would prefer that the missus stay home. His feelings echo the general insecurity of men at a time when they discovered it was no longer exclusively their right to wear the pants in the relationship. Their new maid Hazel (Klea Blackhurst), however, wants Mrs. Baxter to continue working if for no other reason than to compel the household into needing her services. To ensure that Mrs. Baxter remains content at work, Hazel tackles with gusto everything from arranging an impromptu dinner party to helping little Harold Baxter and his gang search for space aliens.

Director/choreographer Joshua Bergasse offers a very playful and funny production. There is a certain infectious energy here. The dance numbers are especially engaging. While Ron Abel’s music offers no big breakout moments, the effect as a whole is absolutely charming and Chuck Steffan’s lyrics are crisp and clever. Despite moving in mostly predictable directions, the plot is fleshed-out enough to allow the characters space to develop. Even a goldfish is allowed a few moments of fame.

Most important to the production’s success, however, is Blackhurst, who offers up just the right amount of sass and good intention. The rest of the cast also deserves praise. Summer Naomi Smart (Mrs. Baxter) and Ken Clark (Mr. Baxter) elevate their roles well beyond sitcom dimensions. The child actors also deserve special mention. Casey Lyons, Tyler Martin, Ava Morse and Rowan Moxley provide a lot of fun and humor. Ed Kross amuses as the over-the-top business innovator, Bonkers Johnson. For those who cannot afford the luxury of a live-in maid, it might make sense to make the drive to Oak Brook. (Noel Schecter)