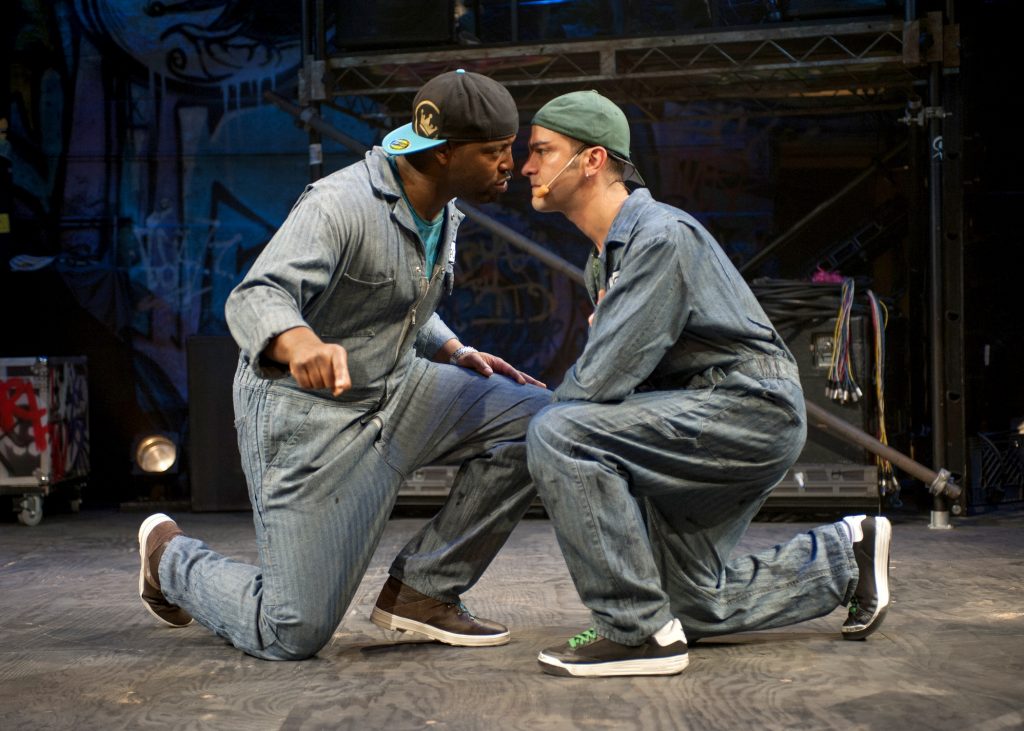 William Shakespeare was the son of a leatherworker. Billy Shakes slanged the lingo with diction and confabulations like swagger, invulnerable, assassination, dexterous, madcap, mountaineer, moonbeam and gnarled. B. Shizzle banged out lines and rhymes with beats that spoke so hard they never stopped. Shazam was the first and best rapper and the Q Brothers pay respect to the one we call the Bard in “Othello: The Remix,” which returns to the turf on which it premiered in 2013.

The production, directed and composed by brothers GQ and JQ, is executed with wit, skill and taut adherence to the Shakespearean tradition. The effusive and direct language of the greatest poet in our language is reconceived in the expository and lyrical modes of rap, which develop the emphasis of iambic pentameter into contemporary verse.

As in Elizabeth’s day, the players are male, double-cast, minimally costumed, placed on a spare set and presented in the round. Baby-faced Postell Pringle plays charismatic rap star Othello, first innocent and magnanimous before becoming obsessed. Slim and aggressive, GQ masterfully plays an Iago tensely simmering with colossal fury. Brother JQ takes contrasting parts: the desperately nerdy Roderigo, here a Dungeons and Dragons-playing lost Waldo in a rainbow pom-pom hat (who pawns his collection of action figurines for a gander at the fair Desdemona), Loco Vito, the strutting mafia boss/tennis aficionado who runs the record label “CEO,” and the pink-haired punk whore Bianca.

Jackson Doran does Cassio, a bloated but good-natured pop star with white boy moves such as the “Cassio Glide.” Doran also portrays Iago’s butch wife, Emilia. DJ Clayton Stamper functions as chorus to the action. Desdemona is no more than a disembodied recorded voice (Sophie Grimm), singing only soprano vocalise, never permitted to appear, speak or really live in what Emilia denounces, in a fabulous R&B interlude, as a “man’s man’s man’s world.”

Straddling absurdity and excess, the truth-telling, soul-roaring and sheer exhibitionism of the combination of rap and tragic drama paired with the rhythmic hymning of vernacular and verse, “Othello: The Remix” is pure brilliance. It is Shakespeare operatically reconsidered for our place and time. (Irene Hsiao)