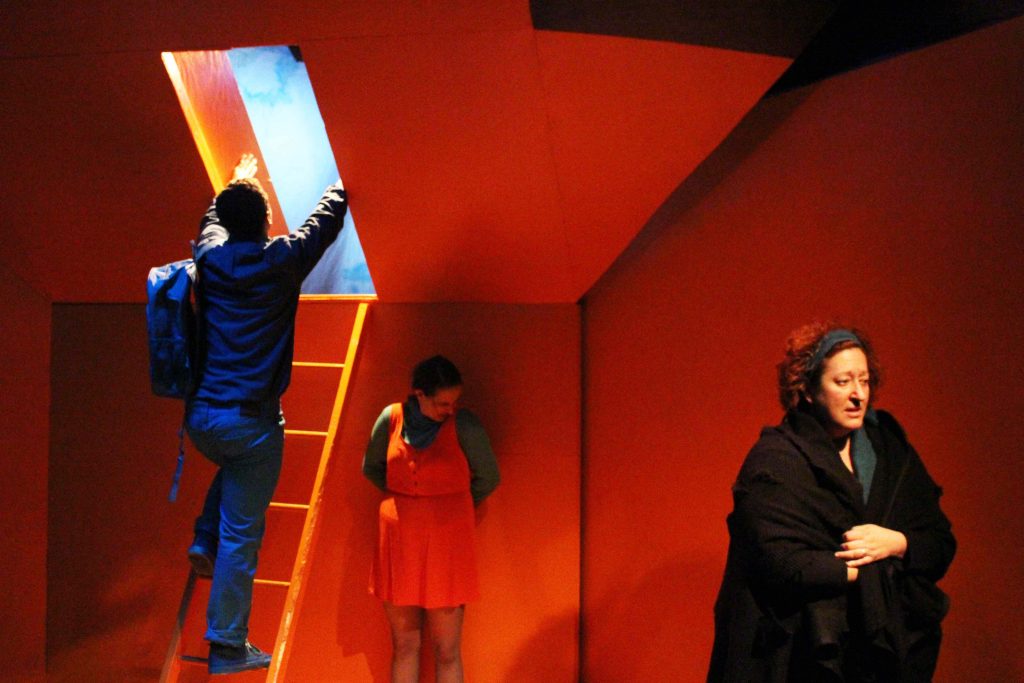 Sarah Myers’ “The Realm” is not a perfect play but it is a perfect fit for the tiny Side Project space. Myers’ imaginative but unfinished portrait of a dystopian future where every resource–including intellect and emotion–is minutely rationed by an all-seeing bureaucracy is all about confinement. Director Kelly Howe and the clever design team at The Other Theatre Company have made a virtue out of austerity, transforming the cramped black box into a garishly colored, claustrophobic nightmare that does not merely engage the audience but engulfs them.

Drawing upon everything from “Brave New World” to “The Hunger Games” to Plato’s cave, the play centers on the rebellion of teenaged James and Kansas against the paternalistically oppressive “realm.” This regime, which rules over a network of subterranean tunnels, has imposed a smiley-faced conformity over a population of ciphers whose ritualized conversations consist of grating self-help bromides. For reasons never explained, the air in the tunnels is toxic, which causes most of those who breathe it to forget all but the most basic words, thus depriving them of the means to articulate thoughts, dreams and desires. Kansas and, to a lesser extent, James are immune to the big dumb-down and set off in quest of something real, free and alive.

Esme Perez as Kansas and Abdu Hytrek as James–both high schoolers themselves–are convincing in their adolescent alienation. While Perez is a bit clenched in her delivery and gesture, possibly due to opening-night nerves, the two performers glow with promise. They are ably supported by a cast of seven including Gay Glenn as the smarmy therapist charged with persuading Kansas to join the state’s behind-the-scenes puppet masters and Carin Silkaitis as a mysterious outsider who remembers the old words and recites them as a poetic descant to the deadening background mutter of clichés.

From a conventional dramaturgical perspective, Myers has written only the first two acts of a three-act play and much is left unresolved and underdeveloped. But I’m guessing that’s intentional. As this haunting and incomplete play ends, the protagonists are still trapped within the prison-like realm, and so are we. And that would seem to be the point. (Hugh Iglarsh)

The Other Theatre Company at the Side Project, 1439 West Jarvis, theothertheatrecompany.com, $20-$25. Through May 8.